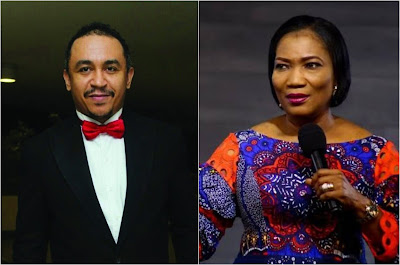 Controversial OAP Daddy Freeze has reacted a video which shows Pastor Felix Adejumo telling her congregation to go offline before they sow seed.

Felix Adejumo, a co-founder of Agape Christian Ministries with her husband, was heard in the video saying,

This didn’t sit well with Daddy Freeze who mocked her. According to him, if what she was doing is scriptural, there won’t have been any need for her to tell her congregation to go offline.

He also advised her to go offline quite earlier next time or use the scriptures to ask members to sow a seed because he will be watching.


Recall that in 2018, Reverend Funke Adejumo came under attack after a video surfaced showing her telling her Church members to sow a seed of N1 million for stupendous wealth.

The video which some quarters found offensive, led to the signing of a petition to stop the female preacher from stepping into the UK.