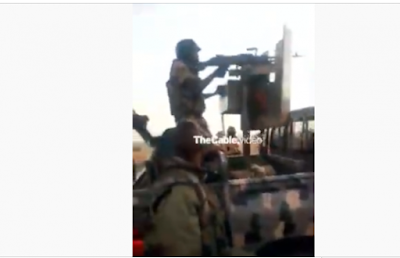 Troops of 7 division of the Nigerian Army overpowered some Boko Haram fighters on Maiduguri-Damaturu road in Borno state on Sunday evening.

Insurgents have carried out multiple attacks on the road in the last one month.

In a video , soldiers were seen firing towards the direction of their enemies.

“Fire! Fire! Kill them! Finish them!” one of the soldiers shouted as sounds of gunshot rented the air.

“See one gun truck there… Boko Haram abandoned that gun truck,” another soldier said as the gunshot continued.

Towards the end of the two minutes, 58 seconds video, a soldier said: “As you can see, we had victory over Boko Haram today. They abandoned their vehicle.”

Some soldiers then inspected the vehicle left by the insurgents before moving it away from the scene.

Below is the video: