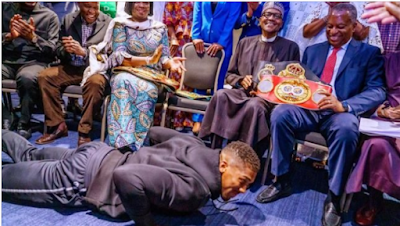 The world heavyweight champion whose father is originally from Sagamu in Ogun state, met with Buhari who is currently in the UK for an investment summit.

Geoffrey Onyeama, minister of foreign affairs; Nìyí Adebayo, minister of industry, trade and investment; Abike Dabiri-Erewa, chairperson of the Nigerians in Diaspora Commission (NIDCOM), were among those with the president when he received Joshua.

The boxer has always been proud of his Nigerian heritage. Shortly after reclaiming his titles from Andy Ruiz, jnr, in December, Joshua released a video where he hailed Nigerians for their support.

In 2017, he said Nigerian staple, eba and egusi, was the secret of his success.

Bashir Ahmad, presidential aide, tweeted this video of Joshua’s meeting with the president: