Uzodinma describes PDP protest as an attempt to overthrow Buhari 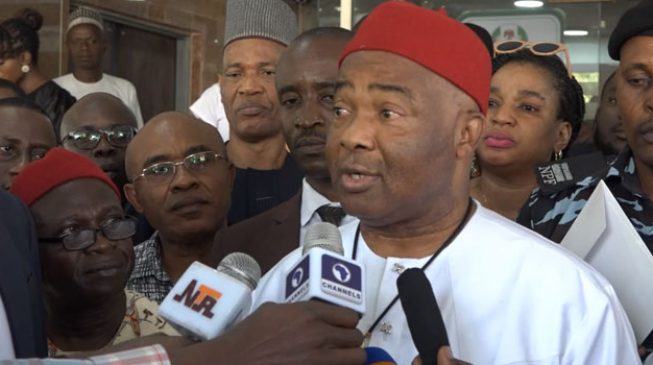 Hope Uzodinma, governor of Imo state, has described the demonstration against his victory at the supreme court as an attempt to overthrow President Muhammadu Buhari.

On Monday, hundreds of PDP members took to the streets to protest the judgement on the removal of Emeka Ihedioha, member of the opposition party, as governor of Imo.

Dissatisfied with the verdict, PDP members took to the streets.

Speaking after he received APC members who held a solidarity march for him in Owerri, the governor said the protest should be investigated.

“If it is the Imo State governorship election, why are PDP members protesting in Abuja, Bayelsa and everywhere in the country? Why are they not protesting only in Imo state?” Uzodinma said.

“PDP wants to overthrow the government of President Muhammadu Buhari. I therefore, use this medium to call on all the security agencies to begin an investigation into the organised synchronised national crisis, which the PDP is plotting.

“I want you to keep supporting the government of President Buhari. You all know that I was the frontrunner candidate during the 2019 governorship election in Imo State. I did not challenge the election on the grounds of violence.”

He said he challenged the election in court because the electoral commission refused to accept the results of 388 polling units it had accepted at the collation centres.

“The tribunal did not understand our petition. The appeal court gave us a minority judgement, but the supreme court, in its wisdom, understood our petition and gave judgement in our favour,” he said.