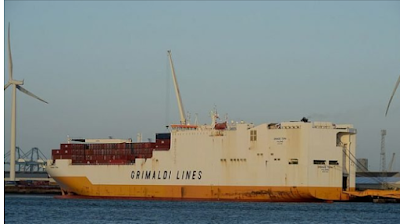 Four Nigerian stowaways who departed Lagos via a UK-bound ship have been jailed after being found guilty of fighting with the sailors.

The Nigerians, all aged between 21 and 28, were found to have also hurled  faeces at the sailors and vowing to infect them with HIV during the stand-off in December, 2018.

According to Mail Online, two of them were also found guilty of threatening to kill crew members and arming themselves with metal poles.

Samuel Jolumi, 27, Ishola Sunday, 28, Toheeb Popoola, 27, and Joberto McGee, 21 were all found guilty after a two-months trial in the Old Bailey while Popoola and McGee were guilty of making threats to kill.


Popoola was jailed for 31 months, while McGee was sentenced to 32 months; Sunday and Popoola were each jailed for 16 months.

“At least one member of the group made ‘throat-slitting’ gestures at the 27-strong crew and McGee mouthed the words: ‘I kill you’,” Mail Online reported, adding: “Faeces was also smeared across the windows of the cabin that the crew had barricaded themselves into.”

Two of the stowaways were caught by sailors on the upper deck, while the other two were found hanging over the railings near the ship’s propellers.

Popoola and McGee were reported to have previously been sent back to Nigeria after stowing away on separate ships, while Popoola is said to have also stowed himself away three times previously.

McGee reportedly told Essex police that the ship’s crew had treated them “like dogs” because “the food was awful”.

The captain told the court he feared the group could have been “terrorists or Boko Haram” and may have had weapons stashed on the ship.

A statement from UK authorities quoted the four Nigerians as saying they wanted to apply for asylum for “a better life.”

Tony Badenoch, the prosecutor, told the court: “These four defendants left Nigeria and wanted to reach this country. In order to reinforce these demands the defendants also armed themselves with metal poles, threw urine and faeces, and in at least one of the defendant’s cases, they cut themselves.

“The crew believed that the reason for that cut was a form of threat, that they would pass on a disease which they carried to the crew unless their demands were met.

“Those events were, as you would expect, reported to the authorities here in the United Kingdom, and the Grande Tema was held off-shore in UK waters whilst the situation on board was resolved and the crew were no longer at risk and in danger.”

Below are pictures of the suspects: