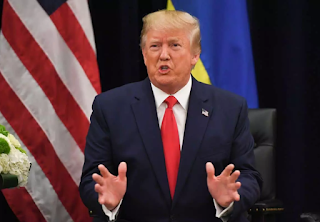 Trump spoke at a GOP fundraising dinner held inside the gilded ballroom on his Mar-a-Lago property Friday evening, CNN reports.

In his speech, Trump said that Soleimani was “saying bad things about our country. How much of this shit do we have to listen to? How much are we going to listen to?”

He called Soleimani a “noted terrorist” who “was down on our list” and “was supposed to be in his country” before traveling to other nations in the region.

“I said, where is this guy?” Trump continued. “That was the last I heard from him.”

Trump noted that strike “shook up the world. He was supposed to be invincible,” Trump said of Soleimani.

The US president added that ISIS leader Abu Bakr al-Baghdadi died “screaming” following a US raid on his compound.

“He was screaming, going crazy,” Trump said. Other US officials have declined to provide further details of al-Baghdadi’s final minutes.

And Trump joked the Belgian Malinois dog that assisted in the Baghdadi raid “got more credit than I did. The dog Conan became very famous”.