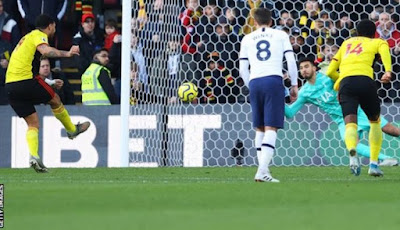 Watford’s Troy Deeney had a penalty saved as his side drew 0-0 with Tottenham at Vicarage Road, extending the hosts’ unbeaten run in the Premier League to seven matches.

Paulo Gazzaniga dived low to his right to deny the Hornets captain following Jan Vertonghen’s handball in the second half.

Watford goalkeeper Ben Foster saved from Nathaniel Chalobah and Lucas Moura before half-time to thwart Jose Mourinho’s side, who have now gone four league games without a win.

Deeney had headed a good chance straight at Gazzaniga just before the break, while Abdoulaye Doucoure shot into the side-netting early in the second half.


Watford substitute Ignacio Pussetto, making his debut for the club, cleared an Erik Lamela effort off the line in stoppage time at the end of the match.

Winger Pussetto, a £7m signing from Udinese, had only been on the pitch for just over a minute when he slid in to hook away with almost the whole ball over the goalline.

The Hornets, who were bottom of the table when manager Nigel Pearson took over in December, move up to 16th, while Spurs are seventh.