Three teenagers arrested for stealing female under wears for rituals 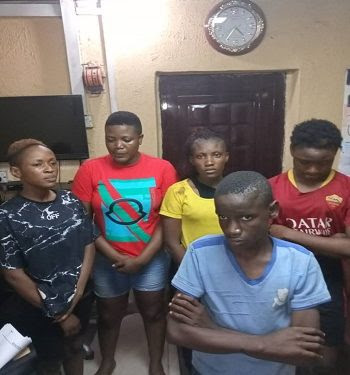 The police have arrested five persons including three teenagers for allegedly stealing female under wears for ritual purposes.

Gold Enyinnaya, 23, Amarachi Akomas, 26 and three others were nabbed by operatives from Ojo Police Station in Ilufe area, Ojo, Lagos.

Police spokesman DSP Bala Elkana said the officers following a tip off on Friday arrested a 15-year-old teenager around 8am in Ilufe, Ojo for allegedly stealing female under wears from clothesline.

The suspect, he said, confessed that for one year now, he has been stealing female under wears from different houses in Ojo and environs.

“That he usually hands over those stolen under wears to Enyinnaya, Akomas and two others, who are teenagers in Ojo. The suspects have been arrested and they confessed to committing the crime. Detectives recovered some stolen female under wears from the suspects. Investigation is ongoing, the suspects will be charged to court,” he said.

In the same vein, police arrested a notorious traffic robbery suspect and a cult leader on police wanted list.

Olowolayemo, he said, conspired with one Bamidele Moses aka ‘badoo’ and robbed one Jude Saka of his Bajaj Motorcycle last Wednesday.

“His accomplice was initially arrested by detectives from Bariga and transferred to the Special Anti-Robbery Squad (SARS) on Friday. The suspect has been on Police wanted list for series of traffic robberies and cult violent attacks in Bariga. The Commissioner of Police (CP) Hakeem Odumosu has ordered that the suspect be transferred to SARS for further investigation and prosecution,” he said.