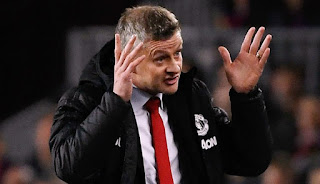 Manchester United chiefs have drawn up a three-man shortlist of managers to replace under-fire Ole Gunnar Solskjaer, according to Star Sport.

United executive vice-chairman, Ed Woodward, is reluctant to sack Solskjaer. But the club has still drawn up a three-man shortlist to replace Solskjaer if results fail to improve, with Pochettino, Gareth Southgate and Julian Nagelsmann figures of interest.

Solskjaer is fighting to save his job at Old Trafford, with United’s points tally of 34 their lowest at this stage of the season since 1990.

The Red Devils find themselves six points adrift of fourth-placed Chelsea and 33 points below Premier League leaders Liverpool, who also have a game in hand.


Solskjaer initially impressed after he was appointed on an interim basis following Jose Mourinho’s sack.

But the Norwegian is now the bookmakers’ favourite to become the next managerial casualty.