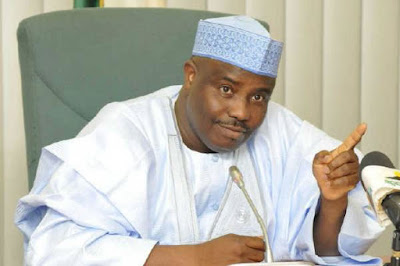 It was gathered that nothing less than 20 serving lawmakers of both the Peoples Democratic Party (PDP) and the All Progressives Congress (APC) showed up at the former speaker’s house.

Tambuwal in his usual style received all and sundry shaking hands with those who could get close to him to exchange pleasantries. The governor cracked jokes with all recalling most callers by their first names and titles.

Similarly, back in Sokoto State, residents trooped out to almost all streets, celebrating the affirmation of Tambuwal as the duly elected governor of the State.


It was observed that the crowd, mostly youth trooped to the streets chanting songs in favour of the PDP and Tambuwal.

Some of the crowded streets include Fodio road, Runjin Sambo, Usmanu Danfodiyo University road, Old market, Gobirawa, Rijiya among others.

One of the youth Aliyu Usman who spoke with NAN, thanked Almighty Allah for the Governor’s success at the Apex Court.

Usman said that the jubilation was to show gratitude to God over the victory of Tambuwal, insisting that the apex court’s decision was “an affirmation of the real mandate of the people.”

Recall the Supreme Court in a unanimous judgment on Monday held that the appellants failed to prove allegations made against the election that returned Tambuwal as Governor.

Justice Uwani Aba-Aji while delivering judgment held that the cases of the appellants lacked in merit and hereby dismissed.

APC candidate Ahmed Aliyu Sokoto had approached the apex court to set aside the concurrent judgment of the tribunal and Court of Appeal which upheld the election of Tambuwal and declare him winner of the Sokoto governorship election.

INEC had declared Tambuwal of the PDP winner of the Sokoto governorship election having won majority of votes cast with a slim margin of barely 300 votes.

The APC candidate in his appeal however claimed that the election was rigged in favour of Tambuwal and approached the Supreme Court to nullify the election.

The Court of Appeal, Sokoto Division, on had reaffirmed the election of Gov. Tambuwal, as duly elected in the governorship election held in the state.

The lead Judge, Justice Husseini Mukhtar of the appeal court upheld the judgement of the tribunal which had earlier dismissed the petition filed against the governor by Aliyu.

The court noted that both appeals and cross-appeal were lacking in merit and thereby dismissed them at no cost.

The petition had challenged the declaration of the candidate of the PDP, Governor Tambuwal as the winner of the general and supplementary polls conducted by the INEC on 9th and 23rd of March, 2019, respectively.