6:05 AM CuteNaija 0 Latest News in Nigeria 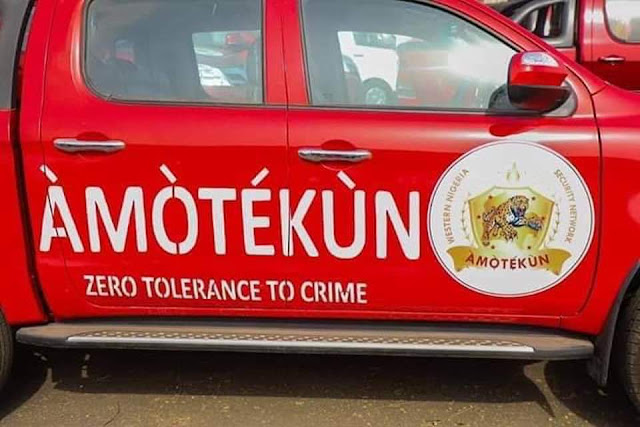 It was gathered that the talks with the President would be preceded by a meeting of the South-West governors this week.

The Attorney General of the Federation, Mr Abubakar Malami, SAN, had on Tuesday said Operation Amotekun was illegal, adding that the Federal Government was not carried along while the security outfit was being planned.

But before the launch of the security outfit on Thursday, the Ekiti State Governor, Dr Kayode Fayemi, who is also the Chairman of the Governors’ Forum, had met the Inspector General of Police, Mohammad Adamu.

The idea to set up the security outfit was conceived by the South-West governors, monarchs and other stakeholders, at a meeting in June last year following a series of killings and kidnapping in the zone.

It can be recalled that intrigues among the governors and interference by the Federal Government were threatening the operation of the security outfit.

According to the report, some elements within the Presidency and the police high command are not favourably disposed to the regional outfit because they consider it as part of restructuring agenda which the South-West has been clamouring for.

But a source among the governors told one of our correspondents that they would meet this week.

The source said,” Governors will definitely meet this week and it is in their meeting that they will decide when to meet the President on the matter. One thing that is sure is that there is no going back on that project because it is a project that is being embraced by the entire South-West and other regions.”

The Ondo State Governor, Mr Rotimi Akeredolu, again on Wednesday defended Operation Amotekun, saying it was not a paramilitary outfit.

Akeredolu, who is also the Chairman of the South-West Governors’ Forum, said this at the 2020 Armed Forces Remembrance Day in Akure.

He said, “The security of our people is very paramount to us. That is why you voted us in. Operation Amotekun is to complement the efforts of the armed forces and the police .

“So we are on very sound legal grounds, and we will pursue this to a logical conclusion. Operation Amotekun is one of the solutions we can proffer to the security challenges in the South-Western Nigeria.

“The activities of the personnel working for the outfit have not come out and someone sat in his office and said they are paramilitary. How did he come to that conclusion?”

Also, in an interview on Channels Television’s Politics Today, Akeredolu said Nigeria is a federation and not a military government.

The governor, who said the South-West governors would meet to take a decision on how to resolve the issue, said the zone would first seek a political solution to the problem.

He said, “If that fails, we will go to court and allow the court to decide.

“We do not have to consult with the AGF to set up Amotekun. The President and the IG were already informed. The AGF should have been more circumspect before making the statement he made yesterday.”

Akeredolu said the Amotekun operatives “can’t be used for political purposes. They can’t be found at campaign grounds or venues.”

His Oyo State counterpart, Mr Seyi Makinde, after a closed-door meeting with former President Olusegun Obasanjo in Abeokuta on Wednesday, berated the AGF.

Makinde arrived at the Olusegun Obasanjo Presidential Library at 2pm and left at 5pm.

In an interview with journalists after the meeting, Makinde lampooned Malami for declaring that Amotekun was illegal.

He said the AGF lacked the power to declare Amotekun illegal, maintaining that the AGF could only interpret the law and advise the President.

He said, “My personal position is that you actually don’t run a government on the social media. If I see a letter or a call from the Attorney General of the Federation telling me what was circulated on the social media, then, it would be a different type of reaction.

“Besides, I don’t think for a country like Nigeria, the Attorney General will just wake up and make his own laws. He may interpret and advise the President if there are legal issues, but I haven’t seen anything that gives that power to the Attorney General to make that declaration.”

The Lagos State Governor, Babajide Sanwo-Olu, said the South-West governors would decide the next line of action.

His Chief Press Secretary, Gboyega Akosile, in an interview with newsmen said, “The South-West governors did come together to form Amotekun. If there is anything that wants to run against the security outfit like the pronouncement made by the AGF, the governors will come together to have a common stand.”

Soyinka, at a press conference in Lagos on Wednesday, advised those he said were sleeping when Nigerians were being killed to return to sleep. He berated Malami for declaring Operation Amotekun illegal.

Soyinka, who is the Akogun of Isara, Ogun State, traced his past concerns first for sanity on roads through a proposal to the then military governor of the Western State, Major General David Jemibewon (retd.).

He further cited talks on the protection of lives and property at the dawn of Boko Haram attacks with the late National Security Adviser, Gen. Owoeye Azazi (retd) in 2012.

The Nobel laureate recalled that he hosted the Ooni of Ife, Oba Adeyeye Ogunwusi, last year in his Abeokuta, Ogun State home, on security matters.

He said by the collective consciousness of people in the region, the governors met, examined the menace and came up with a solution through Operation Amotekun.

He said,” Some people, who have been sleeping all this time, taking belated actions, watching the citizenry of this nation being decimated, villages being wiped out, farmers being chased off their lands; not merely in the North-East or North-West but also down South to Ogun State, Bayelsa to the East; Enugu, are telling us that this initiative is illegal, unconstitutional. I think they should go back to sleep.

“There may be criticisms here and there. That’s normal. It’s expected. There will be fears that this might be misused. There are possibilities of correction. But to say that a people don’t have a right to defend their lives, to secure their means of livelihood, to flush out the evil elements among themselves. I am talking about ritual killers, kidnappers, armed robbers and 419ners.’’

The Nobel laureate described as enemy action, unpatriotic and inhuman to brand the security initiative as illegal when the people wanted to tackle what the existing security unit had been unable to check.

He further stated, “I prefer to believe that the government itself has not spoken. I refuse to believe that any serious government which cares for its citizenry will raise an objection to this kind of initiative. Whether they raise it or not, Amotekun has come to stay. Amotekun is a creation of people about humanity not about legalism.

“Amotekun is only a part of the story. We all know the criminality derived from many causes among them poverty, hunger, desperation, sense of alienation. Amotekun should not just be about crime prevention. It should not be the only solution to insecurity and criminality. There have to be initiatives for the amelioration of the impoverished condition of our people. We should move from Amotekun to Arosikun. Both should be complementary. In other words, we should start thinking in terms of how to feed our own people. We must think outside the normal parameters of productivity and distribution. Hunger is real. Poverty is real and it is very much with us… Amotekun yes, Arosikun; we think also of the needs of the stomach. I don’t want to use the expression ‘stomach infrastructure.’ That already has a bad odour. And those who promoted it would know very well whose stomachs they were looking after. I prefer just Arosikun. Amotekun and Arosikun both combined to end criminality once and for all in our community.’’

Soyinka, who noted that the country’s was battling insecurity, urged the Federal Government to drop false pride and seek international help.

At the 16th Annual Gani Fawehinmi Lecture, with the theme, “Federalism and the Judiciary in Nigeria,” Agbakoba, Falana and Adegboruwa faulted Malami’s declaration of Amotekun as illegal.

Agbakoba, who delivered a paper on federalism at the lecture, said as far as he could see, the setting up of Amotekun by the South-West governors breached no provisions of the 1999 Constitution.

He encouraged the six South-West governors to take Malami to court on the issue.