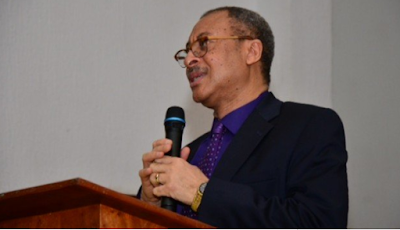 Pat Utomi, a professor of political economy, says former President Shehu Shagari was a “chain smoker” but he so respected his office that he never smoked in it.

According to the PUNCH, Utomi said this on Monday while speaking at an occasion to mark the 50th anniversary of the Nigerian civil war.

The professor said whenever the late Shagari wanted to smoke, he would step outside his office which was located in Dodan Barracks at the time.

He described the former president as a “true nationalist”.

“To smoke, President Shagari would come out. And I would come out; and Aba Dabu and I would corner him and start chatting him up. And I saw a true nationalist in that man, that history and the newspapers probably will not capture enough.”

Utomi also narrated how he got a job with Shagari’s government.

“I somehow got lucky, a young fellow coming back from grad school, thinking he could change the world and then I got identified by that vice-president [late Alex Ekwueme] and one day he says to me, ‘President Shagari, yesterday, approved for you to replace Prof. Odenigwe’; and I said, ‘what does that mean?’,” he said.

The late Shagari was president between 1979 and 1983. He was overthrown in a coup which brought in the regime of Muhammadu Buhari, a major-general at the time.