Saraki, Kwara to settle dispute over ‘Ile-Arugbo’ out of court 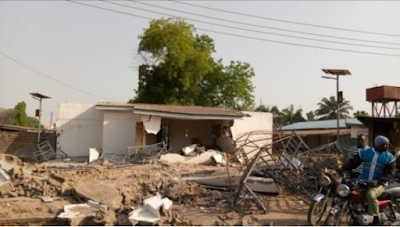 The Kwara state government and the Saraki family have considered settling the dispute over the demolition of ‘Ile-Arugbo’ out of court.

‘Ile Arugbo’, known to be the political home of Olusola Saraki, father of Bukola Saraki, former senate president, was demolished by the state government after the land was revoked.

AbdulRahman AbdulRasaq, Kwara governor, had said the land, originally designated for the construction of a secretariat and a parking lot of the civil service clinic, was illegally allocated to Asa Investments Limited, a private firm, owned by the late father of the ex-senate president.

The committee on the review of sale of Kwara state government properties also said there was no application or payment records on the property.

But Saraki approached the court to challenge the action of the state government. He said the land was duly allocated and that a right of occupancy title was issued on it.

After the matter was taken to court, A. A. Adebara, the judge, appealed to both parties to explore the possibility of settling out of court.

Ayodeji Ibrahim, counsel to the firm, in a letter dated January 20 and addressed to Salman Jawondo, commissioner for justice and attorney-general of the state, said the applicants were willing to settle the matter out of court in line with the judge’s advice.

In a letter dated January 23, A. M. Bello, director, civil litigation at the state ministry of justice, invited the family to a meeting.

The meeting has been scheduled for Monday at the governor’s office in Ilorin, the state capital.

“Your letter of 20th January, 2020 on the above subject-matter refers. I am directed by the Honourable Attorney-General to invite you to a meeting in respect thereof scheduled to hold as follow: 27th January, 2o20,” the letter read.