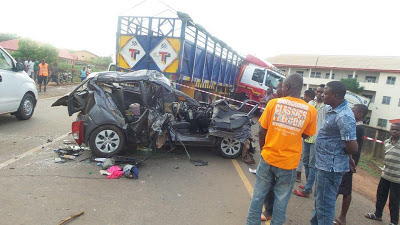 The Traffic Compliance and Enforcement Corps (TRACE) in Ogun, said that no fewer than 31 persons died in various road accidents across the state during the Christmas and New year period.

Mr Babatunde Ajayi, Director, Traffic Planning, Research and Statistics, TRACE, made this known in a statement in Abeokuta on Saturday.

Ajayi noted that the accidents which were recorded between Dec. 15, 2019 and Jan 15, 2020, involved 11 private cars, 10 private buses, 13 commercial buses, 15 commercial vehicles, six motorcycles and one tricycle.

He added that the accidents also involved 12 medium articulated vehicles, 11 heavy trucks and 13 other vehicles.


The director explained that during the period, 291 persons were involved in road traffic accidents, out of which 160 persons (96 males and 64 females) sustained various degrees of injuries.

He stated that 31 persons, consisting of 15 males and 16 females died, while 100 persons were rescued unhurt due to prompt response to 47 emergency calls received by the corps.

According to him, 41.93 per cent of the accidents were caused by excessive speed and 23.78 per cent by dangerous driving.

The director said that 88 vehicles and 39 motorcycles were apprehended for 163 offences,” he said.

He noted that the statistics generated was as witnessed by the corps in areas it covered.

Ajayi said that the corps had resolved to reduce road accidents on all roads in the state and as well prosecute traffic offenders.