7:38 AM CuteNaija 0 Latest News in Nigeria 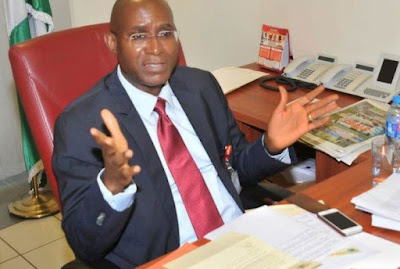 A coalition of protesters on Friday stormed the headquarters of the Department of State Services in Abuja, demanding the prosecution of the Deputy Senate President, Ovie Omo-Agege, over an alleged conviction for perjury in the United States by the Bar Court of the State of California, Los Angeles in 1996.

The protest followed the expiration of the 72 hours ultimatum the coalition gave to Omo-Agege to resign.

The coalition said their demand was necessitated by the “available information that gave credence to the fact that Ovie Omo-Agege was numerously convicted by the State Bar Court of the State of California, Los Angeles, USA and that he served jail term.”

The protesters carried placards with inscriptions like ‘Omo-Agege should be prosecuted’, ‘End impunity in the Nigeria Senate now’, ‘DSS, act now’, ‘The Nigerian Senate is for honourable men and women, not for ex-convicts’ and ‘Don’t destroy our Senate with ex-convicts.’

It can be recalled that the spokesperson for the groups and convener, Coalition of Civil Society and Youth Groups in Nigeria and National Coordinator, Empowerment for Unemployed Youths Initiative, Solomon Adodo, had at a press conference in Abuja argued that such silence contravened the provisions of the Nigerian Constitution and the rules of the Senate.

He had said, “The law enforcement agencies should immediately initiate fresh prosecution against Ovie Omo-Agege for the grievous offence of perjury and denigration of the Nigerian Constitution. In the event that immediate actions are not taken within 72 hours of this notice, we shall be left with no other option but to mobilise thousands of civil society and youth groups to occupy the National Assembly until it is purged of corrupt elements.”

But Omo-Agege had in his response earlier sent to newsmen by his Special Adviser (Media and Publicity), Yomi Odunuga, said he had been cleared of all charges in the said case and was never a convict in the USA as being alleged.

On Friday, Adodo led the protesters to the DSS headquarters in Abuja. The protesters in the protest letter which was received by a senior official of the DSS on behalf of its Director-General, Yusuf Bichi, said available information before the coalition, indicated that “in 1998, Augustine Ovie Omo-Agege was suspended from the practice of law with probation for three years by the Supreme Court of the State of California, having been convicted for forgery of cheques on March 7, 1992 in violation of Penal Code, Section 470.”

Apart from Adodo, other signatories to the letter to the DSS were Danesi Momoh (Guardians of Democracy and Development); Khalifa Bello Adamu (Partners for Legislative Agenda for Nigeria); Edwin Olorunfemi (Centre for Policy Advocacy and Leadership Development); Mallam Balarabe Musa (Arewa Youth for Peace and Security) and Jacob Okpanachi (Civil Society Advocacy Group for Accountability and Probity).