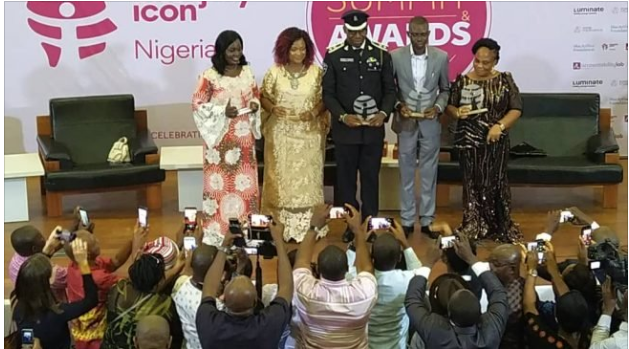 Francis Erhabor, the divisional police officer of Itam, Akwa Ibom state police command, has received the 2019 Integrity Icon award for rejecting a N6 million bribe to compromise the security system while he was a pipeline commander in Edo.

The Integrity Icon summit & award is organised by Accountability Lab in partnership with Luminate, MacArthur and Ford Foundation “to name and fame honest government officials, thereby encouraging integrity in the public service”.

The officer was honoured alongside four other nominees at the event which was held in Abuja, on Tuesday.

The other nominees are Tani Ali Nimlan, an official of the National Agency for Food Drug Administration and Control (NAFDAC); Tina Lirmdu, a lecturer at the University of Jos, Plateau state; Kacheilom Roberts-Ndukwe, a teacher in a secondary school in Port Harcourt, Rivers state, and Christian Ahiauzu, head of the network infrastructure unit in ICTC at the University of Port Harcourt.

Erhabor, who has served the police for 30 years, said he snubbed a N6 million weekly deal to compromise the system, despite his allowance of N37,500.

“I almost compromised if not for the mercies of the Lord. The story that is making frontline today that has brought me here was when I had just N800 in my pocket and I was a pipeline commander in Edo state, where I had worked for close to three to four years,” he said.

“My actual allowance was just N37,500 from the government, which was not coming when due. And  I had a few persons who dangled N1.5million to me and they were to be giving me N6million every week. And if I were to be there for 30 days, that is N24 million.

“I eventually spent more than three years. But because of that decision  I took before I entered the force because I had taken an oath that the day I compromise myself, Lord just embarrass me, show me on  TV. Make me stick to the N37,500 that was not forthcoming.

“It didn’t go without persecution and agonism, sometimes my life was threatened, but the beautiful thing is that at the end of the day, I earned respect, I earned trust, got confidence not only from my colleagues but also from outside forces and it has been fun because the outcome has paid off.”

In a tweet, the organiser of the award congratulated the police officer, describing him as the “people’s choice”.

“Our People’s Choice Award winner @integrityiconng CSP Francis Osagie Erhabor, who saluted the incredible & inspiring roles played by his mom and his wife in his life and career. Congratulations,” it said.

Joe Abah, director of DAI Nigeria, an international development firm implementing programmes on governance in more than 100 countries, also said Erhabor deserves to be celebrated and honoured by the police.

“The winner of this year’s Integrity Icon @integrityiconng award is…wait for it… a policeman, CSP Francis Erhabor. He was voted for by the public. He received a standing ovation from the public. I hope that @PoliceNG also honours him,” he tweeted.


The winner of this year’s Integrity Icon @integrityiconng award is...wait for it... a policeman, CSP Francis Erhabor. He was voted for by the public. He received a standing ovation from the public. I hope that @PoliceNG also honours him. Cc. @AccountLab. pic.twitter.com/TphPktTfBB
— Dr. Joe Abah (@DrJoeAbah) January 21, 2020