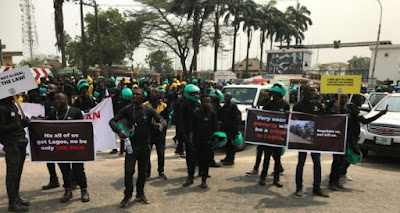 Thousands of Okada riders on Friday stormed the Lagos State House of Assembly to protest the ban imposed on them by the State Government in 15 councils, major highways and bridges across the State.

The protesters, which comprise e-riders, Max riders and Gokada stormed the State House of Assembly in the afternoon, demanding for a reversal of the ban on them and tricycles by government.

The riders, who had apparently mobilized themselves in large numbers, marched to the Governor’s Office in Alausa carrying placards with different inscriptions like “Our Live Matter Too,” “Very Soon, Poverty Will Be a Crime in Lagos.” “Na all of us get Lagos, no be only the rich,” “Regulate us, not kill us,” among others. 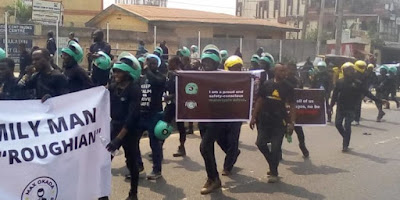 Some of the protesters lamented the action taken by the state government, describing it as insensitive to the plight of the masses and called for regulations instead of outright ban.

A member of the Lagos State House of Assembly, Bisi Yusuf, representing Alimosho 1 constituency later accepted a written petition from the protesters.

While addressing them later, the lawmaker advised them to be law abiding and also comply with the ban first before their petition was considered.

Stern looking policemen stationed at the Lagos State House of Assembly end of the State House prevented the protesters from getting to the main entrance of the Governor’s office.

The Lagos State Government had on Monday banned okada and tricycle riders in six Local Governments and nine Local Council Development Areas, LCDAs, of the state.

Commissioner for Information and Strategy, Gbenga Omotoso, said after a robust assessment of the debate on what has been widely referred to as the Motorcycle (Okada) and Tricycle (Keke) Menace, the Lagos State Government and the State Security Council had decided that the security and safety of lives of Lagosians were paramount.

“The figures are scary. From 2016 to 2019, there were over 10,000 accidents recorded at the General Hospitals alone. This number excludes unreported cases and those recorded by other hospitals. The total number of deaths from reported cases is over 600 as at date. 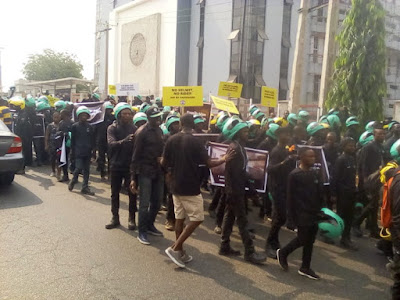 The commissioner said the full enforcement would begin on February 1, 2020, adding that this was the first stage of the State Government’s plan to sanitize roads and protect Lagosians from the negative effects of these illegal modes of transportation.

“The Law is very clear. Motorcycles (Okada) and Tricycles (Keke) are banned on all highways, bridges and the listed roads,” he added. 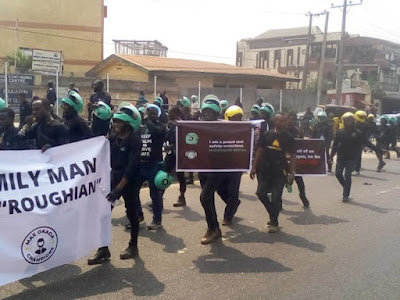 Also, Okada and tricycles have been banned from major highways and bridges: These include:

The commissioner said the law enforcement agents had been directed that with effect from February 1, 2020, there would be Zero Tolerance for Motorcycles (Okada) and Tricycles (Keke) in (on) the listed Local Governments, highways and bridges.

“Members of the public are hereby notified that all offenders and violators will be dealt with in accordance with the Law,” he said.