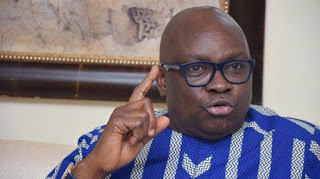 The party also suspended two ward chairmen, Messrs Remigious Ogunmoriye and Tope Makanjuola, for allegedly conducting elections to fill vacancies in their wards without authorisation from the State Working Committee.

The PDP in the state has for some time been polarised over the leadership issue between Fayose and Senator Biodun Olujimi, with the party State Working Committee divided.

Olomofe, who was the party’s acting chairman of Ado Local Government, was removed from office for alleged involvement in anti-party activities capable of sinking the PDP.


According to a statement signed by the party’s Publicity Secretary, Jackson Adebayo, Olomofe was appointed by the State Working Committee, led by its state Chairman, Gbogega Oguntuase, to act in the place of the Chairman of the party, Mr. Akintunde Osadeyi, who had been suspended from the party.

Adebayo added: “The State Executive Committee, after considering the report of the committee set up to review the suspension of Mr. Akintunde Osadeyi, he was  reinstated to his office as the substantive chairman of PDP, Ado-Ekiti Local Government.”

Ogunmoriye and Makanjuola, according to Adebayo, were given three months' suspension, in line with Section 58(1) of the constitution of the party,  while their vice-chairmen would act in acting capacity pending the expiration of the punishment.

Adebayo appealed to members of the party to respect the constitution of the PDP and the leaders for internal cohesion that would position the party to reclaim Ekiti in 2023.