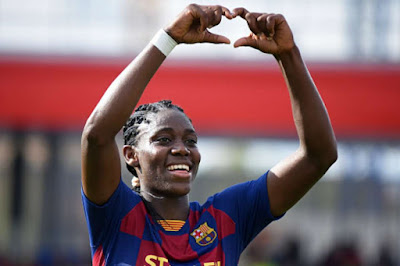 
The 25-year-old scored a brace in each half to complete her first hat-trick in a competitive professional football.

Oshoala scored the first goal of the encounter just two minutes into the game.

In the 19th minute, she found the back of the net for the second time following an assist from Jenni Hermoso, who had doubled the lead in the 17th minute before Marta Torrejon made it four, from Lieke Martens’ cross.

After the break, the Falcons captain netted her first professional treble two minutes after the restart and grabbed her fourth in the 63rd minute to wrap the big win for Lluis Cortes’ side.

Oshoala has now scored 14 goals from the same number of appearances this season, including six goals in two matches in 2020.

Saturday’s massive win helped Barcelona maintain their seven-point gap at the top of the log and Oshoala will hope to continue her impressive goalscoring run at home against Rayo Vallecano on January 18.