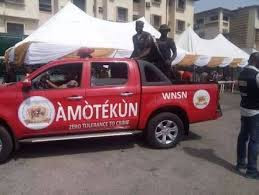 The police commands in Ekiti, Ogun and Ondo states during separate interviews with our correspondents, said they would not tolerate illegal possession of firearms by the members of the group.

They said anybody in possession of illegal weapons would be arrested.

Also, a top police officer, who confided in The PUNCH, said the operatives could only use Dane guns, which do not use cartridges.

Lagos, Osun and Ekiti state governments had, on Friday, said they would recruit about 1,320 operatives from the OPC and other groups for the Operation Amotekun, which was launched by the South-West states on Thursday.

The states had before the launch, said the OPC and other members of the SSSG, would be used for intelligence gathering.

But Adams, in an interview with the newsmen  on Monday, said the OPC members and others should not be used for intelligence gathering alone.

He said for effectiveness, they should be trained and supervised by the police. “Security is about life and death. The police and other security agents can train them and license their gun use to greatly assist in the operation. They should not detain suspects but hand them over to the police,’’ Adams said.

Following serial killings and kidnapping in the South-West, governors in the zone had at a meeting in June decided to set up Operation Amotekun.

No fewer than 120 patrol vehicles were on Thursday made available to the security outfit.

The Police Public Relations Officer for the Ekiti State Police Command, Sunday Abutu, said any OPC member that had prohibited firearms would be arrested.

Abutu said it was the responsibility of the police to arrest and prosecute any individual or group bearing arms illegally.

The police spokesman, who said the community security outfits like the vigilantes and hunters could not carry prohibited firearms, said, “The approved local vigilante groups can only carry Dane guns.

“Even people that are going to use those ones (Dane and local guns) have to be approved by the police. The police know those ones that are prohibited and the ones that such groups can use.

“Once we see anybody or group with prohibited firearms, we will arrest them because they are not allowed to carry such.”