One feared dead as shiitte members clash with police in Abuja 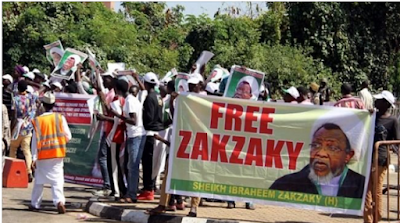 One person reportedly lost his life when policemen clashed with members of the Islamic Movement of Nigeria (IMN) in Abuja on Tuesday.

The incident occurred around Berger, a busy interchange in the nation’s capital.

Trouble started after the IMN who were marching from Utako ran into some police officers at Berger.

The protesters, who held banners with pictures of Ibraheem El-Zakzaky, IMN leader, were chanting: “Allah is great, Allah is great.”

A witness revealed hat the protesters pelted the police officers who tried to disperse them with stones, forcing the security operatives to fire tear gas and later release bullets into the air.

According to him, a passerby was hit by a stray bullet.

“The police shot into the air. It was that bullet that hit the man on the head. Immediately the first shot was fired they all dispersed,” he said.

An Abuja resident also shared his experience on the incident.

IMN members have demanding the release of El-Zakzaky who has been in detention since December 2015.
The authorities have failed to release him despite court orders.

In July, a federal high court in Abuja declared the movement a terrorist organisation.