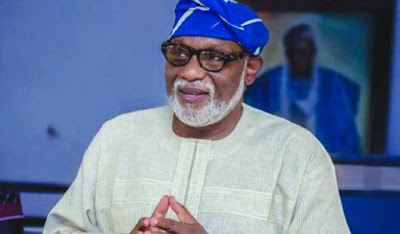 Rotimi Akeredolu, governor of Ondo, says his state is poor.

Akeredolu said this on Thursday  at the launch of the Western Nigeria Security Network (WNSN) codenamed “Amotekun” (leopard), a joint security initiative by south-west governors.

Reacting to the absence of Babajide Sanwo-Olu, governor of Lagos, at the event which held in Ibadan, Oyo state, Akeredolu said his Lagos counterpart wanted to fly into Oyo but could not do so because of the weather.

Akeredolu said he that is from a poor state had to travel down by road but because Lagos is rich, Sanwo-Olu opted to fly in.


“I must convey the apologies of two of our governors who are not here. What has happened is part of problems you face in harmattan period, particularly when you are from a rich state that you believe you can come with helicopter but helicopter now say that it cannot land,” Akeredolu said jokingly.

“But those of us who came by road, we arrived safely. You know Lagos is rich and they wanted to come by helicopter.

“Their vehicles came before them and they are here. So at times, it’s good to be poor. Ondo is a poor state and all of us are here now… but the two of them are part of this; let me assure all of us.”

Sanwo-Olu and Dapo Abiodun, governor of Ogun, are the only south-west governors that did not attend the event.

He said the governors in the region have grown worried over the consistent reports of killings and kidnappings in the zone, hence the need to initiate Amotekun.

“We cannot predict the exactitude of where these incidents will take place, hence we felt that combined efforts of all us will be very necessary. The current situation in the country requires pragmatic and proactive solutions. The south-west seems to be the centre of negative reports in recent times,” he said.

Akeredolu said Amotekun is only a complementary agency and not a replacement for the police, adding that they (south-west governors) do not plan to overstep their boundaries.

“It will serve as an effective complement to the security measures put in place by the federal government. It is not our intention to erect any antagonistic structure. Amotekun is only one among the solutions to the socio-economic challenges we face in this region.

“Our initiative appears ambitious to a number of people and its operation looks opaque to the skeptics. We on our part are clear on the purpose and objectives we seek.

“This is not in any manner, a body which will operate as an alternative to the police force. Its role is mainly complementary.”

The governor said beyond the 120 vehicles procured by the states, they each have over a hundred motorcycles to be deployed in the operations.

He allayed fears that the group will serve as a form of state police, saying it will not be abused.

“No governor will use Amotekun for political activities,” he said.