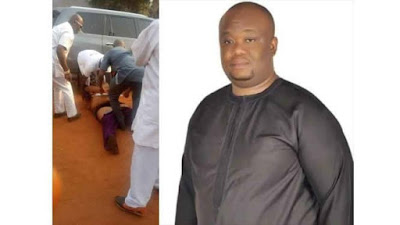 A senatorial aspirant in Imo North Senatorial District(Okigwe Zone) Hon. Ndubuisi Emenike was on Sunday evening shot dead in a case of ‘accidental discharge’ by a Nigerian Security and Civil Defense Corps officer.

The officer was said to be attached to the deceased, who was the senatorial candidate of the Action Alliance (AA) during the 2019 election.

Campaign for who replaces Uwajumogu just kicked off, though, unofficially with Ndubuisi, making serious inroads to win the by-election.

The big bodied businessman had attended a function in the Isiala Mbano local government area of Imo State, and was about to leave when the security operative attached to him shot him.

Emenike, popularly called Ototonwa was rushed to the Federal Medical Centre, Owerri, where doctors battled in vain to keep him alive after the amount of blood lost.

Hundreds of people trooped to the FMC praying for quick recovery of the philanthropist.

The security personnel, whose name is yet to be ascertained, has been attached to Emenike for some years, even before the build up to election.

A source said the security man attached to the businessman mistakenly fired a gun shot in his direction and bleeding started.

Further, the source said Emenike was rushed to a hospital in Okwelle in the Onuimo but was referred to FMC for proper medical care.

According to him, no one knew where he was shot exactly because of the amount of blood all over his body.

Already arrangements are in top gear for his interment.