Not every African will get visa on arrival -Immigration boss 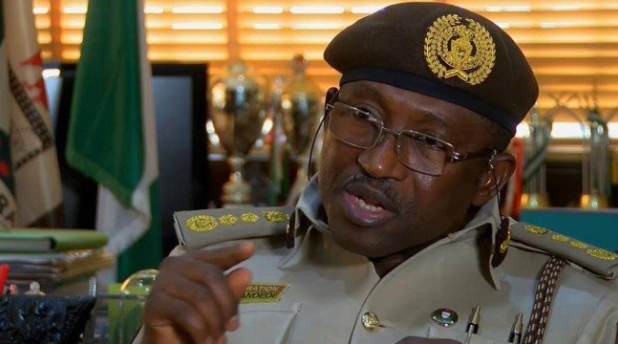 Muhammad Babandede, comptroller general of the Nigeria Immigration Service (NIS), says the visa-on-arrival policy will not apply to all visa classes.

The immigration boss said the difference between the old method of issuing tourist visas and the present model is that short-visit visas are now being issued on arrival.

“The difference now is that we will give you that visa at the point of entry. People made a lot of unnecessary propaganda saying Mr President said visa-free. There was nothing like that,” he said in an interview that aired on the Nigerian Television Authority (NTA).

“And it is not every visa you will pick at the airport, we said only short-visit visa. You can’t say you want to pick resident permit and you pick your bag from another country to enter Nigeria.”

“We have strengthened VISA at the point of entry better than it is before. The VISA issued at the point of entry is biometric VISA and a clearance system (MIDAS) has been installed at the airport.” Comptroller General of @nigimmigration, @babandedemb. pic.twitter.com/zZu0h7L4IV
— Government of Nigeria (@NigeriaGov) January 21, 2020


Babandede said the visa-issuance process has been upgraded such that visitors who overstay their visas can be detected.

“In the olden days, we only issued rubber-stamp visa; ink and rubber-stamp. Later we went to vignette but this visa we are issuing at the point of entry is a biometric visa. We’ll take your fingerprint and picture.

“We just installed a clearance system at the airport called MIDAS. MIDAS is a system that does not allow border entry until we take your biometric.

“So we want to assure Nigerians that it is not every African that will collect the visa at the point of entry, only those who are coming for business and a short visit.

“If you are coming for employment, you will pick it up at the embassy and when we give you a short time, we now have a mechanism that can monitor when the time expires.”

In December, President Muhammadu Buhari had announced that Africans would get visas-on-arrival to enter the country from January 2020 to encourage free movement of people.