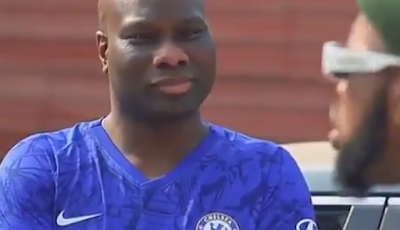 Mompha, who is known for his extravagant lifestyle, had fizzled into the spotlight in 2019 after he was arrested by the Economic and Financial Crimes Commission (EFCC) over alleged money laundering.

In the over three minutes video, Broda Shaggi plays the role of a police officer edged by an accomplice, also a police officer. Both officers wielding guns stop a car on a street for a security check.

The driver of the car turns out to be Mompha, who takes down the car’s windscreen and is immediately recognised by the police officers.

“Who be Police? I be criminal,” Mompha retorts. “You’re a criminal!,” responds Broda Shaggi.
“Nigerian police will never tolerate and laugh with a criminal,” he continues. Mompha reiterates he is not a criminal and shouldn’t be addressed as such.

“I am not a criminal, stop calling me a criminal,” he says.
Broda Shaggi then proceeds to request for the car documents and driver’s license which Mompha duly obliges.

He is then asked to come out of the car while Broda Shaggi accuses him of trying to run away.
He argues Mompha — who owns a collection of exotic cars including Ferrari and Lamborghini — is driving a Toyota Camry so he could “disguise” himself.

Mompha responds by saying “that is the ploy that suits the country as it likes to bring people on top, down.”

“No be wetin una country want? Una like to bring person wey don big down,” he said.

The video has since elicited a flurry of reactions on social media platforms especially Twitter.

Read the reactions below:

Broda shaggi just did a skit of how mompha was convicted in less than 3 minutes.

mompha was convicted by EFCC after showing them where his source of income,they still called him a fraudstar because he lives a lavish life style.

Mompha is now an IG comedian probably cos the EFCC seized his passport. Baba for don travel back to Dubai 😂 https://t.co/vZ1rxIRJ29

Everyone has a price, you just have to find out what it is. Brodashaggi is rebranding the image of Mompha here. PR work! https://t.co/1ROdFnTgqA

Mompha is using Broda Shaggi to do the work of Olivia Pope...