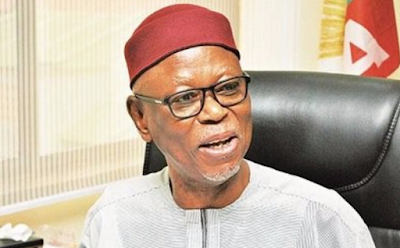 The former national chairman of the All Progressives Congress (APC), John Oyegun, has wondered why Nigerians are increasingly unhappy with their leaders.

Speaking at the 17th edition of the Daily Trust Dialogue, Oyegun said the citizens are losing hope in their leaders and nation.

The former governor of Edo state also said there is a threat to the country’s democracy.

“I borrow from what the former governor of Borno State (Kashim Shettima) said. He passionately appealed that we must try to make Nigeria work. Why is Nigeria not working? At the risk of being misinterpreted, let me make the point that we have been growing in those 20 years, every year and with every administration,” Daily Trust quoted him as saying.


“I dare to even say that there is hardly a single administration in those 20 years that has not left office unpopular and unheralded.

“We have never asked ourselves the question why are our people getting increasingly unhappy with their governors within those 20 years.

“Why are they getting poorer, why are they losing hope, those are the questions I think pose a threat to our democracy because today we are beginning to hear rumblings that we didn’t hear before.”

Oyegun said the controversy over “Amotekun”, a security outfit established by south-west governors, is an example of growing discontent among a section of the citizens.

“Amotekun is just one of them which show a general feeling of enough is not being done in certain areas and this has been a growing syndrome in the last 20 years,” he said.

“What have we missed between government and the people? What should we be doing as government, as leaders that we are not doing? Why is it that our people are losing hope, losing faith in us, and hope in the nation?

“So, there is something fundamentally wrong I cannot give you the answer but it is something that another dialogue probably needs to address.”

He added that democracy “has to develop roots in our nation.”