N4m scandal: I’ve never had anything to do with Shehu Sani, says CJN 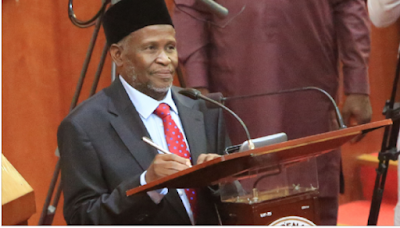 Ibrahim Muhammad, chief justice of Nigeria (CJN), has distanced himself from Shehu Sani, a former senator who is currently being investigated by the Economic and Financial Crimes Commission (EFCC) over alleged extortion.

The EFCC had arrested Sani last week for allegedly collecting money from Sani Dauda, owner of ASD Motors, promising to pass it on to Ibrahim Magu, acting chairman of the anti-graft agency.

Sani, who represented Kaduna central senatorial district between 2015 and 2019, was also alleged to have said he could assist Dauda in influencing the outcome of some cases using his connection with the CJN and some other judges.

But in a statement on Sunday, the CJN who denied being involved in such unethical conduct, said he has never met Sani.


He wondered why some persons were out to damage his reputation in exchange for financial reward.

Vowing that perpetrators of “such falsehood” can never be allowed to walk away with the dastardly act, Muhammad said the lesson that those behind the defamation would learn “will surely serve as deterrent to other potential name droppers and extortionists, who are apparently wanting in noble candor that may also be eagerly waiting in the queue to thread the same path of infamy”.

“Our attention has been drawn to the story making the round in some national dailies where it was reported that Senator Shehu Sani allegedly approached Alhaji Sani Dauda of ASD Motors and purportedly demanded for the sum of N4, 000,000 to give to the Chief Justice of Nigeria, Hon. Dr Justice Ibrahim Tanko Muhammad, to settle some unnamed four Judges over a case he (Shehu Sani) allegedly claimed won’t see the light of the day,” the CJN said in a statement which Festus Akande, spokesman of the supreme court, issued on his behalf.

“Let it be known that if the statement credited to Shehu Sani was actually made by him, it is simply a blatant lie, a figment of his imagination and an orchestrated falsehood immodestly concocted to malign, smear and disingenuously tarnish the good image and reputation of the CJN with a view to gaining financial reward.

“Even though the veracity of the true source of the unsubstantiated statement has not yet been ascertained to know if it was really from the former Senator, it is, however imperative to keep the records straight by letting the public know that Justice Tanko Muhammad has never, in his entire life, seen or had any form of encounter or interactions, either directly or remotely with Shehu Sani, let alone giving him assurances of what is not only unethical but equally despicable and inglorious, to say the least.

“The outcome of the ongoing investigations will determine the next line of action to be taken regarding the flagrant defamation of the character of the Chief Justice of Nigeria.”