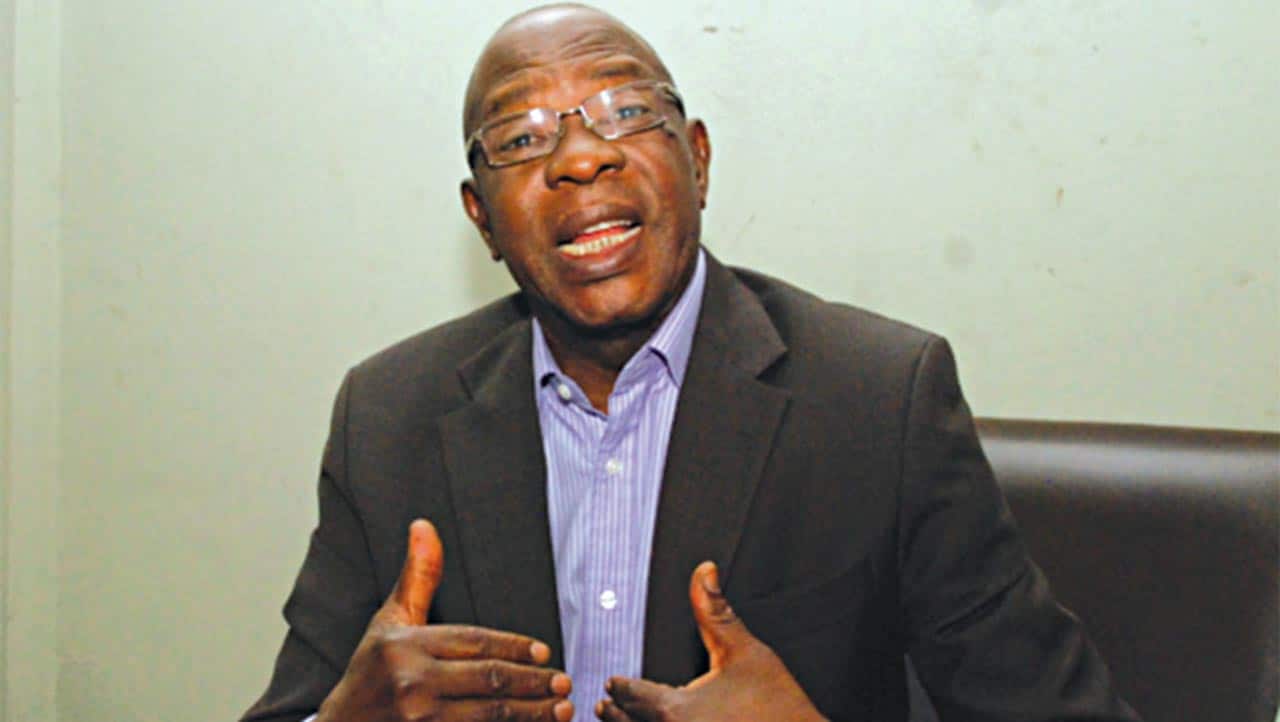 John Chiahemen, the man accused by a former presidential candidate of the Peoples Democratic Party, Alhaji Atiku Abubakar of disappearing with the N150m paid him to settle the bills of foreign consultants hired by his media company GOTEL has now denied receiving such funds.

Atiku had on Thursday, through his Senior Special Adviser on Media and Publicity, Paul Ibe reacted to the reports that he owes some foreign workers, explaining that money meant for the affected staff members was given to their recruiter, one John Chiahemen.

However, in a statement he made available on Tuesday morning, Chiahemen described the former Vice President’s claim as false, malicious, and a carefully orchestrated attempt to tarnish his image.

Contrary to the claim that he disappeared with the fund and had refused to make himself available, Chiahemen said he did not ‘bolt’ but was away on sick leave, a situation the Chairman of the Board was notified of and even acknowledged.

He explained further, “My attention has been drawn to a publication in The News/PM News and Sahara Reporters online news sites, both of January 16, 2020, captioned ‘On the matter of Gotel Expatriates’ (“the publication”).

“In the publication, Paul Ibe, the Media Adviser to Gotel’s Founder, His Excellency Atiku Abubakar, made some false and libelous allegations against my person to which I am compelled to respond in order to correct the misrepresentations and misinformation contained therein.

“In the publication, it was alleged that I, John Chiahemen, was given a free hand by the founder and board of Gotel Communications Ltd and Gotel Africa Media Ltd (Gotel) to run the affairs of the companies, that requisite resources, as requested by me were made available; that by 2016, there were concerns that the Chiahemen management was only long in promises and short in performance, prompting the then board to impanel an Ad Hoc visitation committee to examine the state of the company and that the findings of the committee were damning.

“It was further alleged in the publication that the visitation committee recommended the need for a comprehensive audit of the company; that the audit revealed serious fiduciary infractions by the Chiahemen led management; that further to the audit report, a board meeting was convened to consider the auditor’s report; that before that meeting of the board, Mr. John Chiahemen bolted and has refused to make himself available to account for the huge resources put under his charge.

“The publication also stated that ‘for the avoidance of doubt, the funds dedicated to the payment of salaries of staff, both local and expatriates that were engaged by Chiahemen himself were made available to him. All those concerned are advised to contact Mr. Chiahemen accordingly.’

“The publication concluded by stating that on the 14th day of December 2016, a formal petition on an alleged breach of trust, fraud and misappropriation of funds against me was filed at the FCIID (Interpol) for investigation and advised that I make myself available to give an account of all monies allegedly put under my charge during my tenure as the MD/CEO of Gotel.

“Funds meant for the payment of Gotel staff salaries (local and expatriate) were not made available to me.

“In the publication, it was alleged that “the funds dedicated to the payment of salaries of staff, both local and expatriates that were engaged by Chiahemen himself were made available to him. All those concerned are advised to contact Mr. Chiahemen accordingly.”

“I am aware that prior to my unceremonious removal as the Managing Director, payment of salaries had become difficult since mid-2015, and the Group Financial Controller had informed management on several occasions that this was due to the downturn in Nigeria’s economy. Consequently, management did not renew contracts for international staff when they came to an end and others agreed to cut theirs short and leave by the end of 2015.

“The Financial Controller and the Company Secretary have made repeated promises to these former staff since mid-2015 that the arrears would be paid, and my physical presence has never been necessary to verify any payments. Indeed, I am in the same class as the other members of staff hired to launch the Gotel Africa international news channel as I am also owed salary in arrears of several months.

“I am not aware of any audit report on my management neither was I ever questioned in connection with the purported audit.

“In relation to the purported audit committee report, let me state firstly, that the purported audit referred to in the Press Release if it exists, was a vindictive charade carried out after my removal. I have not been presented with or asked to respond to any queries relating to any audit while it was in progress or thereafter. I am not privy to the content of the speculated audit report or called upon to render an account.

“As I have further explained below, the so-called visitation panel was a vindictive and a scapegoating exercise that had nothing to do with Gotel Africa but with the breakdown and rot of equipment at the Yola station over the years before the arrival of my management team.

“Contrary to the publication, I did not ‘bolt and refuse to make myself available to account for the [alleged] huge resources put in my charge’. I was away on sick leave. The Chairman of the Board was notified of my trip and acknowledged my notification. In my absence, a Board meeting was held in Yola during which I was unceremoniously removed, and an acting Managing Director named to take over. The assertion that I had bolted is totally false and malicious as key Board members knew exactly where I was and were in written and telephone communication with me throughout.

“I am not aware of any petition against me written to the FCIID or to any other law enforcement agency.

“Relatedly, I am unaware of any petition written to the FCIID (Interpol) against me as I have not been invited by any law enforcement agency on any of the false allegations levelled against my person. All Gotel Africa Management’s financial transactions were made through the bank and the bank statements are available. Required funds to float the buildup of the international TV network for which international professionals were hired were never released by the Group Financial Controller even when approved by the Board of Directors and the Founder.

“To emphasize “funds dedicated to the payment of salaries of staff “were not in my custody. All the former international staff, including myself, received a statement of salary arrears from the Company Secretary long after I had left Gotel.

“The allegation that there were concerns that the Gotel management under me was ‘only long in promises and short in performance’ is a wrong projection of my management team, as it is on record that we successfully put Gotel on international satellite with footprint across Africa, the Middle East and parts of Western Europe before the license deadline of May 20, 2015.

“We turned a local station in Yola into a national channel via the DTT platform of CONSAT, and Gotel could for the first time, be watched in Abuja, Lagos, Ibadan, Port Harcourt, and other major cities. The Founder’s residence in Abuja was the first live connection in Abuja.

“The NBC also included Gotel on its trial national digital service from Jos that was due to be extended to Abuja. All these services have been shut down because key satellite carriers cut Gotel off for nonpayment of platform fees.

“All the achievements of my management were in spite of the lack of proper project funding. My management submitted a detailed project plan for the rollout of the 24- hour international channel in Abuja and refurbishment of the provincial the station in Yola, with costs and implementation timelines, in November 2013.

“This was approved by the Board the same month and the author of the Press The release was a member of the Board. No funds were ever released for the proposal despite repeated pleas and delegations by the management and the Board to the Founder.

“This fact is verifiable from Gotel’s bank statements which show that the project for the rollout of the international station and refurbishment of Yola was not funded. My management’s revenue forecasts were conditioned to project funding.

“The poor state of the facilities at the Yola station was an inherited condition from previous management and repeated requests by my management team for funds for the repairs and maintenance were ignored.

“The so-called visitation panel was a vindictive and scapegoating exercise that had nothing to do with Gotel Africa but with the breakdown and rot of equipment at the Yola station over the years before the arrival of my management team.

“This misrepresentation and falsehood contained have been propagated by Gotel as far back as 2016 and it has caused serious damage to my profession, reputation, character and solid reputation as a renowned and a veteran international journalist with a track record spanning more than 40 years. I have held editorial management roles with Reuters, running bigger budgets and multicultural staff.

“In view of the foregoing, I would like to inform the general public that the publication was part of an orchestrated campaign of calumny dating back to 2016 aimed at damaging my hard-earned professional and personal reputation, character and to bring me into public odium, obloquy, infamy, scandal, scorn, and contempt.

“While I am taking legal advice from my lawyers with a view to seeking appropriate legal redress against the publishers of the defamatory material, I would urge the general public, family, friends, and well-wishers to disregard the same.”