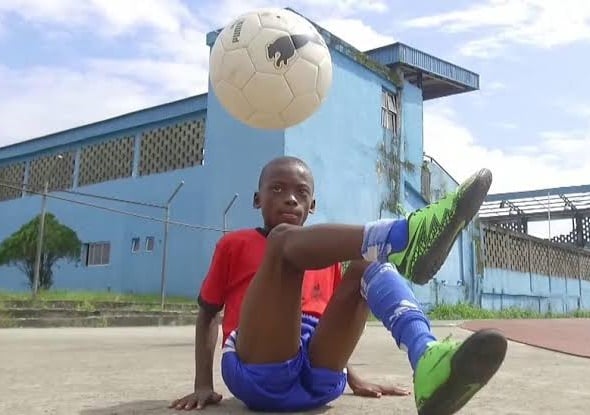 Chinonso Eche, an 11-year-old football freestyler, is making the headlines after setting the record for the most consecutive football touches in one minute while balancing another football on the head.

According to Guinness World Records, the precocious chap holds the record as the youngest person with “most consecutive football (soccer) touches in one minute while balancing a football on the head 111.”

Nigeria's @AmazingkidEche holds the record for most consecutive football (soccer) touches in one minute while balancing a football on the head ⚽️ 111 https://t.co/3g8QKgQpmm
— GuinnessWorldRecords (@GWR) January 20, 2020

The Warri-born wonderkid had once revealed to BBC Africa how his father inspired him with videos of great football superstars including Okocha, Messi, and Ronaldinho.

According to him, such clips ignited his interest in football as he hopes to play for the Super Eagles and other top European football teams like Barcelona, Real Madrid, and Chelsea in the future.

“I love freestyling because it is my gift. In my school, I like to entertain my classmates. Some people call me an amazing Kid Eche,” he had said.

“I’m the best freestyler in Warri (south-south Nigeria). I started freestyling when I was eight. My dad had shown me some videos of Messi, Ronaldinho, and Okocha and I just started practicing.”

“Everyday, I wake up at 4: 30am, I do my training and then go to school. After school, I go to the field and play football with my teammates.

“I would like to play for big clubs, such as Barcelona, Real Madrid, Chelsea, and Super Eagles of Nigeria. I would like to be an international freestyler and travel all over the world.”

Eche further stretches the lists of Nigerian kids who have drawn international attention through their exploits.

Last year, Fathia Abdullahi, a 12-year-old girl, hit the international spotlight after creating a laundry-folding robot — barely a year after she started coding.

Trevor Noah is also expected to produce a movie about Adewumi, an 8-year-old Nigerian refugee, who won the NY State Chess Championship after “fleeing from Boko Haram.”