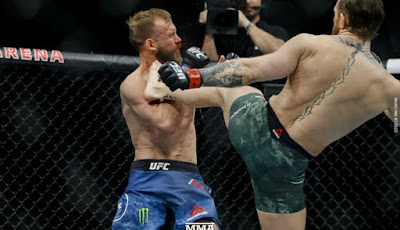 UCF Featherweight and Lightweight champion, FC Conor McGregor has defeated Donald Cerrone in his highly anticipated comeback fight and it took him only 40 seconds to claim the victory.

The 31-year-old Irishman first broke the nose of Cerrone with his shoulder and dropped him with a high kick before striking him with several punches at the T-Mobile Arena in Las Vegas.

It was McGregor, fighting for the first time in 15 months at UFC 246 at the T-Mobile Arena, since his defeat by Khabib Nurmagomedov in 2018, and the second-fastest of his career.

He bloodied Cerrone’s nose in the opening few seconds of their welterweight bout with a couple of unorthodox shoulder strikes.

“I’m so happy. Who’s going up and down divisions and knocking people out like that? I’ve etched my name in history once again.

“I like this weight division, I feel really good. I don’t believe I’m there yet, though, I’ve still got some work to do to get back to where I was.”

The Irishman is expected to rake in a staggering $80 million from the fight.