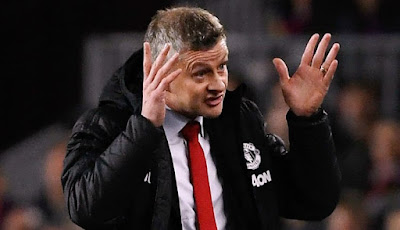 Ole Gunnar Solskjaer says Manchester United retain the power to compete at the top end of the transfer market despite warnings their status as the Premier League’s richest club is “at-risk”.

According to Deloitte’s Football Money League, United’s revenue of £627.1 million ($814 million) in 2018-19 put them third overall behind only Barcelona and Real Madrid.

But the consulting firm warned United could soon find themselves slipping behind Liverpool and Manchester City due to their failure to qualify for the Champions League.

Solskjaer offered a robust defence of the club’s status on Tuesday, speaking ahead of his side’s FA Cup third-round replay against Wolves.


“The most important thing for me is we get the results sorted and the performances on the pitch,” he said.

“But I know that we’ve got the resources, we’ve got the backing. If we need to go into the transfer market we are still up there so we’re still in a good place.”

United are reportedly in talks over a deal for Sporting Lisbon midfielder Bruno Fernandes, who could cost as much as £70 million, though Solskjaer offered no update on that or any other moves in the January market.

Wednesday’s match against Wolves at Old Trafford could offer another opportunity for 18-year-old striker Mason Greenwood, who started in the goalless draw between the two sides at Molineux on January 4.

Greenwood has enjoyed a hugely impressive season to date, scoring nine goals for United’s senior side in 26 appearances but Solskjaer cautioned against England taking him to Euro 2020, with concerns over the availability of the injured Harry Kane.

“I think Mason will have a top career, a long career, but let the boy settle in now before we talk about England and the Euros,” he said.

“His focus has to be playing for us and improving. When he plays well for us, that will happen by itself.”

Solskjaer is trying to carefully manage the demands on his younger players, and his squad as a whole, as they prepare for their 14th game in 46 days.

“It is physically and mentally demanding and we’ve got to make sure we energise them with results,” he said.

“After a performance like Norwich (a 4-0 win) they all felt good about that and used that as motivation.

“We’re not there yet, we’ve got to keep working and improving, just keep the rhythm. I didn’t play in all these games when I was playing but I felt like, as a team, we improved when we got in a rhythm of the match, rest, match, rest.

“The likes of Roy (Keane), Gary (Neville), (Paul) ‘Scholesy’, they only seemed to improve and we need to get to that.”

With United well off the pace in the Premier League and need to overturn a 3-1 first-leg deficit to rivals Manchester City in the semi-finals of the League Cup, Solskjaer is looking to the FA Cup as the most realistic prospect of silverware this season.

“This tournament is one that we all dream about winning when we’re young,” he said. “I loved my time in the finals and lifting the trophy, so we want to go through.”