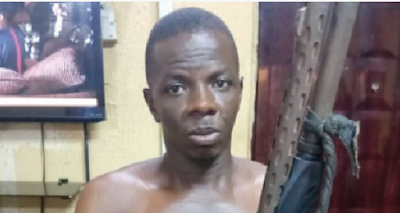 The police in Lagos have detained a local security guard, Sikiru Omotayo, for allegedly shooting dead a passerby he suspected to be a thief.

Omotayo, who was said to be one of the vigilantes at Alaba International Market, allegedly shot at the victim on the suspicion that he wanted to burgle a shop.

It was gathered that the bullet hit the victim, whose identity had yet-to-be identified, in the chest and he died on the spot.

The incidence was reported at the Ojo Police Station by a shop owner at the electronic section of the market and Omotayo was arrested.


A source  said : “I am also a trader at the market. It was when I resumed work from Christmas break that I learnt about the incident. Everybody blamed the guard because he could have handled the situation differently. Even if he had a strong suspicion that the man was a thief and there was no means to stop him other than shooting, he should have shot him in the leg. The man (Omotayo) has been arrested.”

The police spokesperson in the state, DSP Bala Elkana, said the command had began investigation into the “murder case.”

“The man said he received a phone call that one Sikiru Omotayo of Madu Street, Jakande Ajangbadi, who is a security guard in a section of the market, shot and killed somebody suspected to be a thief.

“A police team visited the scene, took photographs and removed the corpse. Nothing incriminating was found on the deceased. The suspect was arrested and detained while one single-barrelled pump action with five live cartridges was recovered from him.”

Elkana said the corpse had been deposited at the Badagry General Hospital morgue for autopsy while the case had been transferred to the State Criminal Investigation and Intelligence Department for further investigation.