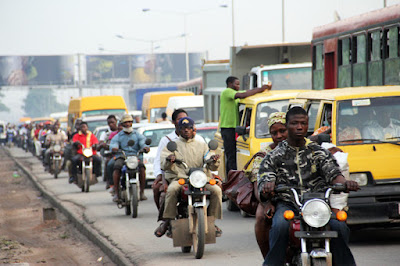 Some motorcycle and tricycle riders in Lagos State have lamented the ban on 2,000 routes in the state.

They said the decision would increase hardship and open avenues for government officials to extort money from them.

The men urged the state government to reconsider its stance.


The Lagos State Government had announced the restrictions on Friday, saying 2,000 tricycles and motorcycle prohibited area signs had been installed across major highways and bridges in the state.

The Commissioner for Transportation, Mr Frederic Oladeinde, had warned that violators of the policy would be sanctioned.

Some riders on Monday went on a protest march in the Surulere, Mushin, Ojuelegba, Itire and Lawanson areas, decrying the restrictions.

A tricycle rider, Segun Bolaji, told newsmen on Tuesday that government would take the jobs of many residents if it enforced the restrictions.

He said, “They want people to go hungry; if they are saying 2,000 routes are no go area for us, how do they want us to feed?

Bolaji said he did not believe that the restriction would work, adding that he had continued to take some of the prohibited routes because he had no alternative roads to connect to certain areas of the state.

Another tricycle rider, Okechukwu Boniface, accused officials of the Lagos State Traffic Management Authority of extorting money from him and his colleagues.

“We are also not happy doing this job; it is because we have no option. We cannot fight the government; they should help us, knowing that there is no job in this country,” he added.

An okada rider, who identified himself only as Monday, warned that people who could lose their jobs because of the restrictions could turn to crime.

“If you take it from me, where do you want me to go? We voted for you Sanwo-Olu, leave us alone,” he said.

But the Lagos State Government on Tuesday restated its earlier clarification that it had not taken a definite action on the operations of the okada and tricycles operators. A statement by the state Commissioner for Information & Strategy, Mr Gbenga Omotoso, read, “Contrary to the news in circulation on the list of restricted areas, especially on the social media, purporting that the government has banned okada and Keke Marwa on some routes, the government declared that no such action has been taken. He described the list as false and unofficial, saying it should be disregarded.