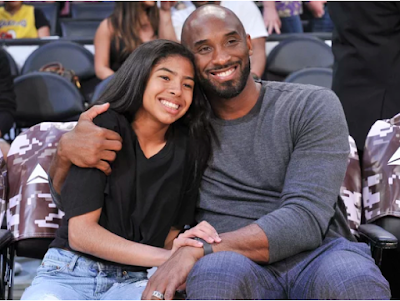 Bryant’s 13-year-old daughter, nicknamed Gigi, was also onboard the private helicopter when it went down on Sunday, reps for the former basketball player told TMZ Sports.

It is believed they were on their way to basketball practice when the crash occurred in Calabasas, near central Los Angeles.


His wife Vanessa is not believed to have been involved in the accident.

The pair share three other daughters, Natalia and Bianca and their newborn Capri.

Judging by the flight path taken, the chopper carrying Bryant circled at least 10 times over a period of 15 minutes before crashing.

Bryant regularly used his Sikorsky S-76 helicopter to travel to and from matches at the Staples Center for years.

The son of former NBA player Joe Bryant, he started his career for the Lakers in 1996 after becoming the first guard to be drafted straight out of high school by the Hornets, who immediately traded him.

He grew up in Philadelphia, and had attended Lower Merion High School in the state of Pennsylvania.
Kobe and wife Vanessa were first introduced when Vanessa was working as a background model on the set of a music video.

Sportsman Kobe was 21 while Vanessa was 17 years old and still a senior at high school.

Eight weeks before the tragic helicopter crash that ended his life, Kobe paid tribute to Vanessa on their milestone 20th anniversary.

"On this day 20 years ago I met my best friend, my Queen @vanessabryant I decided to take her on a date to Disneyland tonight to celebrate old school style (pre 4princesses) I love you my mamacita per sempre," he wrote alongside a throwback picture of them.
He then shared another snap of them cuddled up at Disneyland on a romantic evening.

In 2019, Kobe announced the birth of their fourth daughter, Capri Kobe.

The couples other three other daughters are Natalia Diamante, Gianna Maria-Onore, and Bianka Bella.

Their eldest, Natalia, turned 17 years old a week before his shocking death.

Tributes flooded in after news of the sporting legend's death broke on social media.