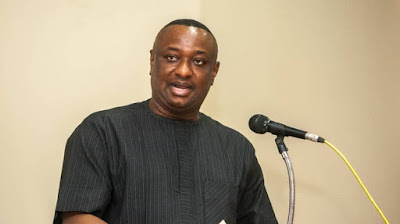 Minister of State for Labour and Employment, Festus Keyamo, on Monday insisted that President Muhammadu Buhari has no reason to silence his opponents who lost during the 2019 elections.

Keyamo said Buhari’s opponents were silenced during the last elections, hence no need for the president to take such step now that polls are over.

The Minister in a series of tweets wrote: “There are butterflies amongst us who think they’re birds. They shouted themselves hoarse against us during elections, yet the voters didn’t listen & nobody ‘silenced’ them. Is it after their ‘threat’ during elections is over that anyone would be interested in silencing them?

“This President has NO REASON to silence those already silenced by the roaring voices of 15m voters in the last 2 general elections. These tiny bad losers are rather the ones who want to silence the voices of those 15 million citizens & govt has a responsibility to prevent that

“The comedians among these butterflies are those who drag in the name of govt into their private predicaments to whip up public sympathy. How would govt turn the public against someone who didn’t have the public behind him in the first place? What is there to turn against him?”

This is coming at a time the Peoples Democratic Party, PDP, accused the Buhari-led Presidency of witch-hunting political opponents.

PDP alleged that the Presidency was bungling Nigeria’s national unity through their exclusionist policies, divisive comments, disregard for rules, and failure to bring perpetrators of violence to book.

The opposition party lamented that all efforts by well-meaning Nigerians and groups to ensure unity and harmonious co-existence in the country are being destroyed by the APC and the Buhari administration through their brazing acts of nepotism, total disdain for merit and complete disregard for the federal character principle in appointments, projects and programmes, to the vexation of the generality of Nigerians.