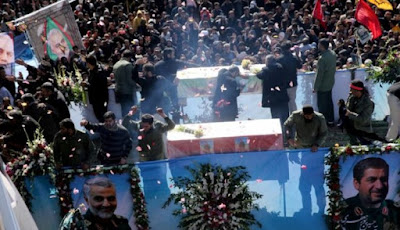 The burial of a top Iranian commander killed in a U.S. drone strike on Friday was postponed on Tuesday due to a stampede in his hometown, the semi-official ISNA news agency reports.

The report did not say how long the delay to burying Gen. Qassem Soleimani would last.

A report earlier said 35 people were killed in the stampede in his hometown of Kerman.

Dozens of people were killed in a stampede as huge crowds of mourners gathered for the funeral of a slain military commander in the southeastern Iranian city of Kerman on Tuesday, forcing his burial to be postponed.


Tens of thousands of people had poured onto the streets of Kerman to pay tribute to Soleimani, who was killed in a U.S. drone strike in Iraq on Friday.

The Young Journalists Club, which is affiliated to state television, said on its website that a stampede had broken out and 35 people were killed and 48 wounded.

ISNA news agency said the burial had been postponed as result.

Soleimani’s body had been taken to Iraqi and other Iranian cities before arriving in his hometown Kerman for burial, prompting mass outpourings of grief nationwide as the coffin was carried through streets.

In other developments on Tuesday, a senior Iranian official said that Tehran was considering 13 scenarios to avenge his killing.

In Washington, the U.S. defence secretary denied reports the U.S. military was preparing to withdraw from Iraq, where Tehran has vied with Washington for influence over nearly two decades of war and unrest.

Soleimani was responsible for building up Tehran’s network of proxy armies across the Middle East and he was a key figure in orchestrating Iran’s long-standing campaign to drive U.S. forces out of its neighbour Iraq.

U.S. and Iranian warnings of new strikes and retaliation have also stoked concerns about a broader Middle East conflict and led to calls in the U.S. Congress for legislation to stop U.S. President Donald Trump going to war with Iran.

“We will take revenge, hard and definitive revenge,” the head of Iran’s Revolutionary Guards, Gen. Hossein Salami, told the crowds of mourners in Kerman prior to the stampede.

Trump has promised strikes on 52 Iranian targets, including cultural sites, if Iran retaliates, although U.S. officials sought to downplay his reference to cultural targets.

However, U.S. Defense Secretary Mark Esper said there had been no decision whatsoever to leave Iraq.

“I don’t know what that letter is,” he said.

U.S. Army General Mark Milley, chairman of the Joint Chiefs of Staff, said the letter was a “poorly worded” draft document meant only to underscore increased movement by U.S. forces.

About 5,000 U.S. troops are still in Iraq, where there has been a U.S. military presence since Saddam Hussein was toppled in a 2003 invasion.

On Sunday, Iraq’s parliament passed a resolution calling for all foreign troops to leave the country.

Iraq’s caretaker Prime Minister Abdel Abdul Mahdi told the U.S. ambassador to Baghdad on Monday that both sides needed to work together to implement the resolution.

Friction between Iran and the U.S. has risen since Washington withdrew in 2018 from a nuclear deal between Tehran and other world powers.

The U.S. has imposed economic sanctions on Iran and Tehran said on Sunday it was dropping all limitations on uranium enrichment, its latest step back from commitments under the deal.

U.S. general Milley said the threat from Soleimani was imminent.

“We would have been culpably negligent to the American people had we not made the decision we made,” he said.

Trump administration officials will provide a classified briefing for U.S. senators on Wednesday on events in Iraq after some lawmakers accused the White House of risking a broad conflict without a strategy.