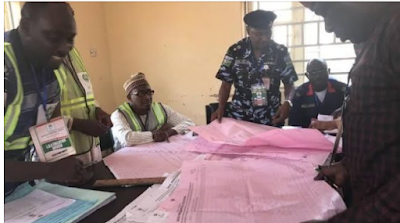 The court said this in its ruling on the petitions on the 2019 Imo governorship poll.

The All Progressives Congress (APC) and Hope Uzodinma, its governorship candidate, had challenged the declaration of Ihedioha, Peoples Democratic Party (PDP) candidate, as the winner of the March election.


Uzodinma and his party had argued that the election results from 388 polling units where he got majority votes were excluded when INEC announced the final tally.

The APC and its candidate sought the inclusion of those votes and after losing at the tribunal and appeal court, their prayer was granted by the supreme court.

In the aftermath of the court’s verdict, the legal team of Ihedioha said the judgement was based on false grounds.

His lawyers also said INEC tendered documents to show that the evidence by Uzodinma and his party were false.

However, the court, did not agree with Ihedioha and his party on the claim.

“As regards the 3rd respondent, it failed woefully to tender the results it termed ‘genuine’, which would have rebutted the presumption of regularity in favour of the documents tendered by the appellants,” the panel held.

The apex court also said the appellants – Uzodinma and APC – discharged the burden on them of proving that 388 polling units which were excluded at the collation favoured them.

“This court does not lightly set aside concurrent findings of the two lower courts. It will however, disturb those findings where it is satisfied that there is an apparent error on the face of the record of proceedings,” it held.