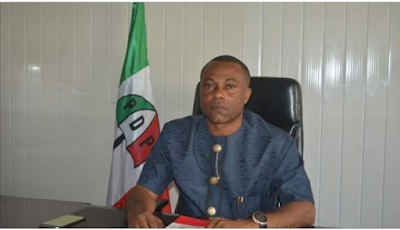 This is coming about two weeks after the supreme court sacked Emeka Ihedioha of the PDP as governor of the state and affirmed Hope Uzodinma, candidate of the All Progressives Congress (APC), as winner of the 2019 governorship election.

In a letter dated January 25 to the party’s national chairman, Ezekwem said his decision to quit is based on the “prevailing circumstances” in the state chapter of the party.

He added that he has also resigned as a member of the party in his ward at Okigwe local government area.


“In view of the prevailing circumstances within my party vis-a-vis my present standing as the State Chairman of the PDP Imo State and after due consultation with my family, and with the approval of my supporters, I hereby tender my resignation as PDP Chairman Imo State; also as a member of the party in the ward of Okigwe LGA which has been duly communicated to the Ward Chairman,” the letter read.

“I thank the teaming population of PDP Imo State who thoughtfully elected me as their State Chairman, i sincerely regret all the inconveniences the party faced. I thank the party for the support they gave me and the opportunity to serve in that capacity.”

A week after the supreme court judgment, nine members of the state house of assembly defected to the APC .