‘If you’re afraid to fail, then you’re probably going to fail’… 20 inspirational quotes from Kobe Bryant 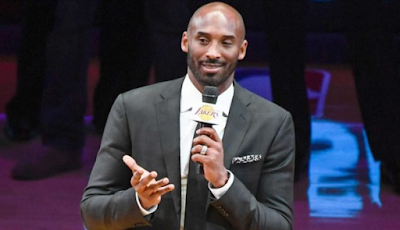 Kobe Bryant, NBA legend, on Sunday, passed away after his helicopter crashed in Calabasas, California.

The 41-year-old basketball star was travelling alongside Gianna, his 13-year-old daughter, and two other persons when his private helicopter crashed.

There were no survivors. The cause of the crash remains unknown while investigation is ongoing.

The Philadelphia native began his career in the NBA with the Los Angeles Lakers at 17.

Bryant would later spend the rest of his 20-year career with the club, winning five NBA championships and 18 All-Star titles before he retired in 2016.

He was also widely considered to be one of the greatest basketball players of all-time.

Bryant is survived by Vanessa, his wife, and their their daughters — Natalia, Bianca and Capri.

An author, a loving father and a legend, below are some inspirational quotes from late Kobe Bryant.

“I have self-doubt. I have insecurity. I have fear of failure. I have nights when I show up at the arena and I’m like, ‘My back hurts, my feet hurt, my knees hurt. I don’t have it. I just want to chill.’ We all have self-doubt. You don’t deny it, but you also don’t capitulate to it. You embrace it.”

“I don’t want to be the next Michael Jordan, I only want to be Kobe Bryant.”

“I’ll do whatever it takes to win games, whether it’s sitting on a bench waving a towel, handing a cup of water to a teammate, or hitting the game-winning shot.”

“My parents are my backbone. Still are. They’re the only group that will support you if you score zero or you score 40.”

“I’ve played with IVs before, during and after games. I’ve played with a broken hand, a sprained ankle, a torn shoulder, a fractured tooth, a severed lip, and a knee the size of a softball. I don’t miss 15 games because of a toe injury that everybody knows wasn’t that serious in the first place.”

“It’s disgusting, but my father taught me when your mouth gets dry, just suck the sweat out of your own jersey. There’s no bravado to any of it; it’s just a disgusting little trick.”

“Everything negative – pressure, challenges – is all an opportunity for me to rise.”

“The most important thing is to try and inspire people so that they can be great in whatever they want to do.”

“Once you know what failure feels like, determination chases success.”

“I realised that intimidation didn’t really exist if you’re in the right frame of mind.”

“The beauty in being blessed with talent is rising above doubters to create a beautiful moment.”

“If you’re afraid to fail, then you’re probably going to fail.”

“If you want to be great at something, there’s a choice you have to make. What I mean by that is, there are inherent sacrifices that come along with that. Family time, hanging out with friends, being a great friend, being a great son, nephew, whatever the case may be.”

“Trust me, setting things up right from the beginning will avoid a ton of tears and heartache…”

“Haters are a good problem to have. Nobody hates the good ones. They hate the great ones.”

“It’s the one thing you can control. You are responsible for how people remember you—or don’t. So don’t take it lightly.”

“Can I jump over two or three guys like I used to? No. Am I as fast as I used to be? No, but I still have the fundamentals and smarts. That’s what enables me to still be a dominant player. As a kid growing up, I never skipped steps. I always worked on fundamentals because I know athleticism is fleeting.”

“I focus on one thing and one thing only – that’s trying to win as many championships as I can.”