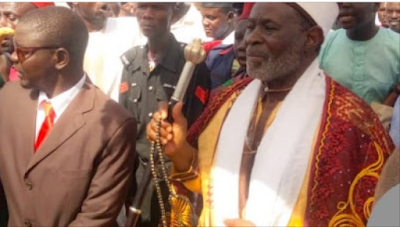 Umaru Bubaram, emir of Potiskum in Yobe, says he miraculously escaped the attack on his convoy by suspected bandits in Kaduna state.

On Wednesday, about six persons, including four of his aides, were killed when the first-class monarch’s convoy was attacked along the Kaduna-Zaria highway.

Speaking with journalists at his palace, the emir said he slept in the bush overnight after the gunmen shot sporadically for two hours.

“We were just about thirty seconds from our discussion then the sound of gunshots erupted. The gunshots were unbelievable. It was just like a war field,” the emir said.

“Instantly, I saw my pilot driver swerved and then hit a standing vehicle. I suspected the shooting affected him and the police people around him.

“As the shooting was going on, we decided to abandon our vehicles and take to safety. God in His infinite mercy led me to escape the danger zone. The gunshots continued for almost two hours. I continued trekking into the bush until when the sound of the guns was a bit far off from me. That is how I found myself, it’s God mercy that helped me to escape danger zone.

“I was in the bush all the time the shooting was going on. The shooting started at around 11.00pm and did not stop until around 1.00am, the following day. I decided to remain in the bush till morning. The security people started to come for me and other groups at around 2.00am but I refused to come out at the time because, I didn’t not know the objective of the attack.

“I was well comforted so I didn’t develop any trauma. I didn’t even know about the death of my people until yesterday morning when the news was brought to me that I lost four of my people in that skirmishes. Some of my policemen also sustained gunshots but were treated at the hospital.”