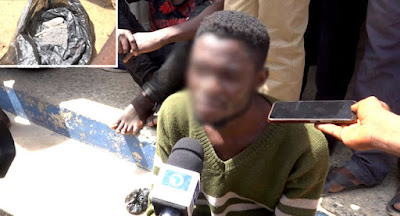 A 31-year-old man paraded by the Taraba State Police Command has confessed to killing his girlfriend, Imbajuri Ambisi.

The suspect identified as Munda Bala reportedly conspired with his two friends to kill his girlfriend who they burnt to ashes before burying her in a bush.

The native of Donga Local Government Area who was paraded alongside some ashes and bones of the deceased, blamed the sad act on jealousy and hardship.

“I fell in love with Imbajuri Ambisi. She became my girlfriend; I got her pregnant and she delivered a baby boy and killed him after seven months.

“This got me angry and I couldn’t tell anyone. My money got finished and she ran away to some wealthy guys who engage in the selling of rosewoods to foreigners.”

“This got me jealous and I met two of my friends who advised me that if I really want my heart to be at rest, I have to kill her, hence our decision to eliminate her."

Taraba State Police Spokesperson, David Misal said a manhunt has already been launched to arrest the other fleeing suspects.