I don’t want to be a role model – Buffon 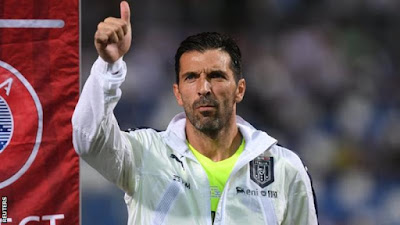 After lining up for Juventus against Sampdoria last year, Gianluigi Buffon equalled Paolo Maldini’s record for most Serie A appearances.

The 41-year-old is Serie A’s third oldest ever player with his haul of nine domestic titles a record he already has all to himself.

While Buffon’s success and longevity is inevitably a source of inspiration for many, the man himself has stressed he doesn’t want to be burdened by being a role model.

“It’s a satisfaction that makes me proud, it’s right to be proud [of the Serie A appearance record]. Life is made of sacrifice and sweat, but also of beautiful and frivolous things,” Buffon told Calciomercato.com.


“I don’t want to be a model for children and people, it’s not my aspiration, I don’t feel the need to educate anyone.

“Many would like you to take on these responsibilities, but the education of a child is up to the parent.

“I can be a food for thought, if a family at the table sees Buffon making 700 appearances in Serie A the father could say: ‘See Buffon, besides the man – whom I don’t know – had the character to suffer at certain times, the ability and humility to improve’.

“I want to be this for my children, but I don’t want to put pressure on them.”