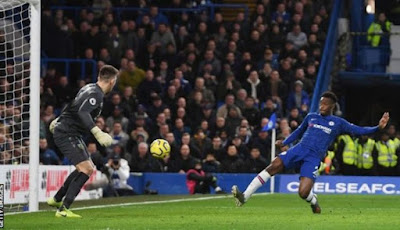 The England winger showed a nice bit of opportunism, stealing in to the box to finish off Cesar Azpilicueta’s chipped ball, to net his side’s third and seal the win shortly after half-time.

The Blues have faltered at the Bridge in recent weeks, losing to three sides near the relegation zone, and were struggling to break down a well-organised Burnley in the opening 25 minutes until Matt Lowton’s reckless sliding tackle on Willian enabled Jorginho to open the scoring from the penalty spot.

Visiting keeper Nick Pope then allowed Tammy Abraham’s close-range header to evade his grasp and find the net to give the Blues a grip on the game before they had even got out of second gear.


The Blues could have had more but three was plenty against a Clarets side who rarely threatened, coming closest to a goal through a Ben Mee header that Ross Barkley hacked off the line.

Chelsea were assured of being fourth in the league regardless of Saturday’s result, but the win ensures they preserve a five-point cushion between themselves and Manchester United, who lead the pack below them chasing Champions League qualification.

Burnley have now suffered four defeats on the bounce – a run of results that has dragged them firmly into the relegation battle. They are four points above the bottom three, but that margin could be reduced on Sunday, with Bournemouth and Aston Villa both in action.