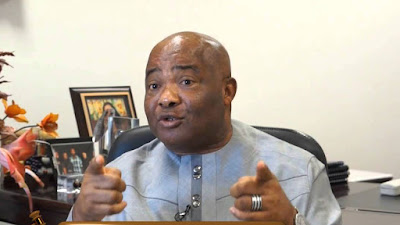 The new governor of Imo State, Hope Uzodinma, on Wednesday initiated the process of the probe of contracts awarded from 2010 till date in the state.

He also sought the comprehensive financial status of the state within the same period.

Former governors Ikedi Ohakim, Rochas Okorocha and Emeka Ihedioha were in charge of the state during the period.


The governor gave the order in his inaugural speech, after he was sworn in.

He said his administration was anchored on rehabilitation, reconstruction and recovery.

According to him, he will revive the state and make it work again.

He said the judiciary demonstrated courage by declaring him the duly elected governor of the state.

He said his victory at the Supreme Court would not have been possible without the support of the leadership of the All Progressives Congress.

The governor said, “My government shall be anchored on reconstruction, rehabilitation and recovery. Every Imo person shall have a say in my government.

“My doors are wide open. I forgive those who conspired to rob me of my hard-earned mandate. Let us work hard to make Imo the pride of Nigeria.

“I hereby direct the accountant general of the state to within four days forward to me the comprehensive financial status of the state from May 2010 till date.

“I also direct the permanent secretaries of all the ministries to within the same period toward the status of the contracts awarded within the time frame. Payment of all ongoing contracts is hereby stopped.”

Earlier, the Independent National Electoral Commission on Wednesday gave the Certificate of Return to Uzodinma.

He said the apex court corrected the ‘wrongs’ of the lower court and Court of Appeal and used its eagle eye of the law to give him justice.

“The first court did not do the thing we expected, the second court followed suit. But the Supreme Court used the eagle eye of the law and gave us justice,” Uzodinma said after receiving his Certificate of Return from INEC National Commissioner and Chairperson (Legal Services), May Agbamuche-Mbu, in Abuja on Wednesday.

Meanwhile, Uzodinma gave an order to all financial institutions where the state funds were domiciled not to honour any draft until further notice.

The order came late on Tuesday hours after the Supreme Court declared the APC candidate the duly elected governor of the state.

A letter was addressed to the regional directors and managers of all the financial institutions in Imo State, and was signed by Cosmos Iwu, Director General of Senator Hope Uzodinma Campaign Organisation.

The three-paragraph letter which was sighted by one of our correspondents on Wednesday read in part, “Following the Supreme Court judgment of 14th January, 2020, I am directed by His Excellency, Senator Hope Uzodinma, to take this as your authority to place a post no debit order on all accounts of the Imo State Government maintained in your various institutions.

“You are by this letter directed to comply and await further instructions from the Office of His Excellency, the Executive Governor of Imo State.”