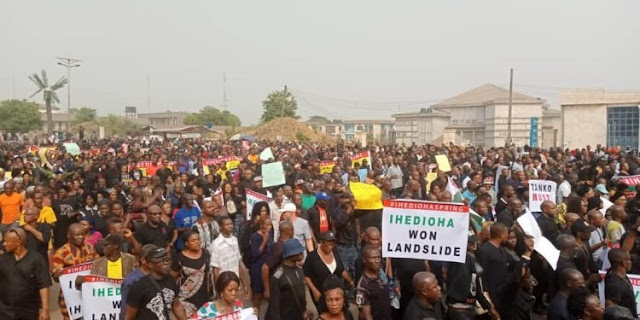 Thousands stormed the streets in Imo, Anambra and Abia to protest what they described as a gross injustice.

The Supreme Court had ordered the immediate swearing-in of Senator Hope Uzodinma, candidate of the All Progressives Congress (APC) in the last March 9 election.


He has since replaced Ihedioha of the Peoples Democratic Party (PDP), who was in office for a little over seven months.

The PDP had called on the Supreme Court to revisit the judgment and demanded the stepping aside of Chief Justice Ibrahim Muhammad.

In Owerri, the Imo State capital, thousands marched on the streets, peacefully protesting against what they termed injustice against Ihedioha.

The protesters, clad in black attires and singing songs of sorrow, bore placards with the inscriptions: “Reverse the injustice now”; “Ihedioha won landslide”’; “Tanko must go”, amongst others.

The protest shut down the state capital for hours, restricting movement.

No fewer than 15 trucks filled with policemen accompanied the protesters to forestall a breakdown of law and order.

One of the protesters, Chief Chris Okewulonu, said the people were in shock.

He wondered why the Supreme Court could remove Ihedioha after he won the election decisively.

“We discovered that initially, the Supreme Court did not devote much time to hear the matter. We deduced that there was some funny movement.

“Our fears were confirmed when on the day of judgement, the Supreme Court went on break and resumed at about 4 pm.

“The judgment was not in consonance with the arguments in court and did not reflect the election that took place in Imo State on March 9 last year. Ihedioha clearly won the election,” Okewulonu said.

He described the judgment as “highly-compromised”, saying it should not stand.

“The Supreme Court must reverse the judgment. It has happened in the past. They should quickly reconvene and do justice.

“There are a number of instances where the Supreme Court realised it made a mistake and reconvened to do justice to the matter.

“The most important thing is the interest of the people of the state,” he said.

Some PDP members in Anambra State also protested against the judgment.

Numbering over 100, they assembled at the state judiciary complex, led by the state chairman, Mr Ndubuisi Nwobu.

The protesters wore black to express their anger over the judgment and bore placards with different inscriptions.

They called on President Muhammadu Buhari to quickly wade in.

They also urged the Supreme Court justices to reverse the verdict, describing the judgment as a travesty of justice.

Nwobu said: “We request that the judiciary should act as an independent arm of government.

“PDP in Anambra wishes to state clearly their unreserved rejection of the judgment.

“They want to foist Hope Uzodinma on the people of Imo State. There is no way a panel of seven judges, no matter how erudite, can sit and decide the fate of the entire Imo people, after the people had made their choice.

“There had been instances where the Supreme Court reversed itself. So, we are calling to question that judgment and asking the justices to accept their mistakes and remedy it urgently.”

In Abia, the state chapter of the PDP urged the Supreme Court to reverse itself.
Members marched through major roads of the state capital with placards bearing different inscriptions.

The state chairman, Chief Johnson Onuigbo, said: “We gathered to express our anger over the Supreme Court judgment.

“We are concerned as it is not only about Abia or Imo states, but about Nigeria and because we are Nigerians. Injury to one is an injury to all.

“We are demanding that the Supreme Court reverses itself.

“The Supreme Court can make mistakes because they are humans. They made a mistake by denying the people of Imo State their votes.

“They are not supposed to appoint the governor. The people elected their governor.

“The decision is injurious to democracy and is an attempt to disrupt our nascent democracy.”

Onuigbo said the judiciary must prove to be the last hope of the common man by reversing the judgment and giving “Ihedioha what belongs to him”.

The party chief said they were suspecting “an invisible hand” in the judgment, considering “the intrigues on how the judgement was given”.

He added: “If moves to reverse the judgment fails, we will forge ahead, but when the time comes, we know what to do.”

Also on Sunday, the Kaduna State chapter of the PDP said the Supreme Court verdict on Imo amounted to the party’s mandate being stolen.

It expressed fears over the pending appeals on Sokoto, Bauchi, Benue and Kano states.

The state chairman, Hassan Hyet, said it was a shame that, after four years in office, the ruling party has been unable to endear itself to Nigerians.

He said: “Our position, however, is to stand in solidarity with the Imo people and the PDP’s decision calling on the Supreme Court to correct its errors and reverse itself.

“This is in view of the monumental injustice done to the good people of Imo and the denial of a mandate freely given to the PDP by them.

“We believe that it is not too late to serve justice to the Imo people and the PDP.”

There are also protests in Taraba and Gombe states.