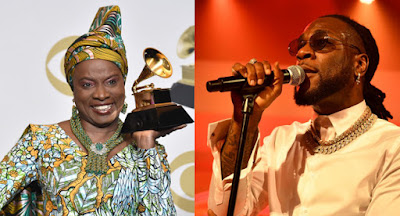 It is no longer news that Beninese singer-songwriter, Angelique Kidjo, has been announced the winner of the Best World Music Album at the 62nd Grammy Awards.

She beat Nigeria’s Burna Boy and three other nominees to win the Grammy on Sunday at the Staples Center, Los Angeles.

With this nomination, Burna joins the growing list of Nigerians like Seun Kuti, Femi Kuti and King Sunny Ade who have been nominated in that category at the Grammy Awards.


In her acceptance speech, Angelique Kidjo said “Four years ago on this stage, I was telling you that the new generation of artists coming from Africa are going to take you by storm.

“And the time has come. This is for Burna Boy.

“Burna Boy is among those young artists that come from Africa that is changing the way our continent is perceived and the way African music has been the bedrock of every music”.

Nigerians on social media have expressed their disappointment over Burna Boy’s loss.

Read the tweets below:

Nigerians, I don't predict things! I'm a good Investigative Journalist. I have judged music awards in 🇨🇦🇺🇸as a music Journalist and music Publicist in North America. Start believing in my WORK. I told you confidently that Angelique Kidjo will win over #Burna #GRAMMYLive https://t.co/z41bNSyQfF
— Dr Kemi Olunloyo (Pharm.D)🇶🇦 (@KemiOlunloyo) January 27, 2020