7:44 AM CuteNaija 0 Latest News in Nigeria 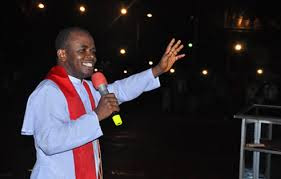 Catholic priest, Rev. Fr. Ejike Mbaka, was the one who dedicated the office of the new Governor of Imo State, Senator Hope Uzodinma.


It was gathered that Mbaka, who came in company with another priest, his aides and church members, prayed for the Government House staff members and security men after dedicating the new governor’s office.

One of the sources said, “Fr. Mbaka was here (Government House) on Wednesday. He was the one who dedicated the governor’s office. He was here for over three hours. He came with another priest, Fr. Otimbodombo and his church workers.

“He was in one of the cars (executive bus) for a long time before he came down and dedicated the governor’s office. We later besieged him and he blessed us and blessed our sacramentals and chaplets.

“Fr Mbaka personally prayed for me and I was happy. He blessed my chaplet which I will be using for prayers. They left after staying for about three hours.”

It was learnt that the priest, who did not go to Heroes Square Arena, where the new governor was sworn in, left for Enugu after the dedication.

The governor appointed the director general of his campaign organisation, Cosmos Iwu, as the secretary to the state government.

Iwu was the SSG between 2007 and 2010 when Ikedi Ohakim was the governor of the state.

He resigned in 2010 to vie for the Imo North Senate seat, which he lost to Senator Matthew Nwagwu.

He is the immediate younger brother of a former national chairman of the Independent National Electoral Commission, Prof. Maurice Iwu.
The governor appointed his long-time friend and ally, Nnamdi Anyaehie, as Chief of Staff.

Anyaehie was a chairman of the Peoples Democratic Party in the state.

He appointed C.O.C. Akaolisa as the commissioner for justice and the attorney general of the state.

Akaolisa was the governor’s running mate before he was later substituted with the current deputy governor of the state, Prof Placid Njoku.

Uzodinma also approved the appointment of Oguike Nwachukwu as his Chief Press Secretary.

A former commissioner for information in the state, Prof. Nnamdi Obiaraeri, who is the governor’s ally, confirmed the appointments.