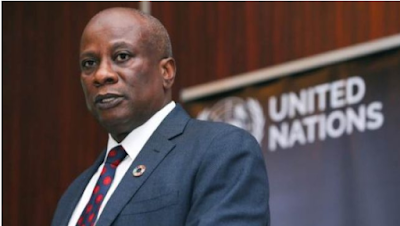 Edward Kallon, the United Nations (UN) resident and humanitarian coordinator in Nigeria, says the Nigerian government should find a political solution to the Boko Haram insurgency.

Kallon said this on Friday at a press briefing to conclude the visit of Janez Lenarcic, European Union (EU) commissioner for crisis management, to Nigeria.

Kallon said the UN does not engage with terrorists, but that it can support the government in finding a solution to the insurgency.

“Let me make it emphatic that the UN doesn’t engage with terrorists or organisations designated as a terrorist. But the UN will support efforts by the government to try to find a solution to the crisis in north-east Nigeria,” he said.

Asked if there were ongoing efforts to get to the insurgents, he said: “Not at this point in time. I don’t even have the capacity and the systems to do this. We can support any effort by the government but in doing so to find a solution to this problem.

“When we talk about political solutions, we are looking at various elements that are so critical to restore hope, build trust and also get people to start rebuilding their lives and livelihoods.

“I strongly believe that where there is a political justification for conflict, there is a solution. You cannot harass the people you want to rule. It is not one of the easiest theories we addressed so far. You can gain power, but you cannot sustain power. So, there is a need to come to the table and try to find a political solution to the problem.

“Reconciliation is an area we can engage and support and who are we going to talk to? The crisis in the north-east is a regional crisis and it has a regional implication.

“So, the regional actors that are being affected by this crisis are also equally very important. So talking to Niger, Chad, and Cameroon which President Buhari has been doing and continue to do remains extremely critical in finding a solution to this crisis.”

In its resolution of January 16, 2020, The EU parliament said there is no progress in the fight against insurgency.

While meeting with the EU on Friday, President Muhammadu Buhari said if Nigeria could recover from the 30-month civil war, Boko Haram would be defeated.