FG treating Boko Haram, ISWAP, others with kid gloves – CAN 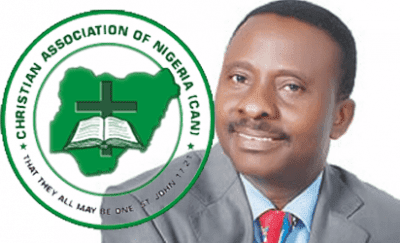 The Christian Association of Nigeria (CAN) has accused the Federal Government of supporting the activities of Boko Haram, Islamic State West African Province (ISWAP) and other terrorist groups in the country.

It urged the government to prove the Christians wrong by “publishing names of kingpins of the terrorists, herdsmen, killers and bandits in their custody and those who are being prosecuted in the court of law for the world to see if the government has not been treating those criminals with kid gloves”.

CAN President Rev. Samson Ayokunle said he would not to keep quiet until the right things are done and Adamawa State CAN Chairman Rev. Lawan Andimi, who was abducted last week by the Boko Haram insurgents, is released.


In a statement on Tuesday by his spokesman, Pastor Adebayo Oladeji, the CAN president said: “The CAN is not doing the bidding of the terrorists by crying out for the freedom of our members in the captivity of Boko Haram terrorists. The government should wake up to its primary responsibility, which is to protect the lives and property of the people.

“Calling on the Federal Government to free our members from their captors, who claim to be attacking us for religious sake, is the right thing to do in this situation we have found ourselves.

“These criminals are targeting predominant Christian communities, killing, maiming and abducting the people with or without any resistance from security agencies. This is unprecedented. Let the government wake up to its responsibilities and see if we will not stop talking about its failure to protect our members.

“That is not politicisation of religion. The governor of Borno State is shouting that the soldiers are extorting money from the people instead of defending them.”