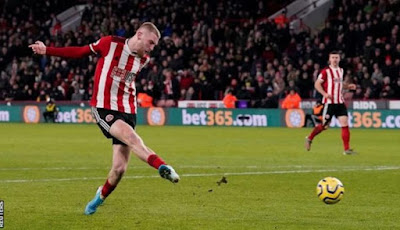 Sheffield United climbed to fifth in the Premier League table on Friday with a win against West Ham, who had an injury-time equaliser ruled out by Video Assistant Referee.

John Fleck took advantage of a big mistake by substitute goalkeeper David Martin, latching on to his wayward pass to tee up Oli McBurnie to finish from close range after 53 minutes.

Substitute Robert Snodgrass thought he had levelled for the visitors, but the goal was disallowed after the ball was judged to have hit Declan Rice’s arm in the build-up.

“VAR, VAR”, the home fans chanted as the final whistle sounded, with West Ham condemned to their eighth defeat in 11 Premier League games and their first under new manager David Moyes.


The result means the Hammers remain two points above the relegation zone and could drop into the bottom three if results go against them this weekend.